I have been planning to address SUVs for a while and as expected, with gas prices rising they have become quite the hot button issue. I just googled “high gas prices suvs” and got an ABC News story from today that almost hit the nail on the head – in terms of what I was looking for. ABCNEWS.com polled its readers “How they felt about the idea the SUVs and pickup trucks might be hit harder by rising gas prices.” Of course they got an enormous response and published 4 pages of feedback. This article was unmitigated vitriol and could make almost anyone’s blood boil (on either side of the issue).

I always thought that the anti-SUV sentiment was two-fold, "global warming" and about bidding up the price of gas/oil. But I have learned that the loathing runs much deeper. SUV antipathy is more of a bricolage complaint and a weapon of class warfare. Here are some excerpts:

"I have hated SUVs and the mentality that gave birth to them since the early '90s when I was in high school, and will continue to hate them and the people that drive them with a righteous anger for as long as I draw breath," wrote Andy Bliss of Los Angeles. "On a daily basis, I let these people know my feelings with my car or a few fingers/choice words. I despise their selfishness, avarice and soul-less need to endanger others for their own comfort. I laugh as I fill my economy car for a fraction of what they do, watching them wallow like the pigs they are in their putrid opulent consumerism."

"I am less than secretly glad when I hear the agony of the SUV people paying $60 to $70 a week to fill their tank," wrote Bernard K. Addison of Los Angeles. "We do not need the size, we do not need the inefficiency, and we do not need the attitude of road ownership and invincibility that reflects in the driving patterns of the majority of SUV owners."

"It's good to see all these arrogant drivers of gas guzzling road machines end up paying half a week's pay to fill up their monstrous machines," wrote Brian Silver Fox of Hammonton, N.J. "I am far from an environmental activist, but there is no reason why anyone needs these vehicles, ESPECIALLY Hummers (which, like assault weapons, should be reserved for the military). I truly enjoy seeing all of them driving around with their jingoistic little magnets on the back, supporting our troops, who are dying simply for their 'right' to own these stupid machines." 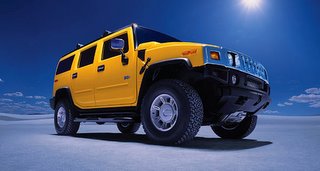 "The SUV I hate the most is the Hummer H2," wrote Scott Cohen of Melvindale, Mich. "Every chance I get, I will flip them off, regardless of whether the driver sees me or not. Hummers are the most obnoxious and rude vehicles for people to use to show off how much money they are making, and that they stick their noses up at the rest of us while driving their $65,000 SUV that is a gas hog and is no good for the environment. I do smile when I see them pulling up at a gas station and spending over $60 on one tank of gas, though."

"What many SUV drivers may fail to realize is that the reason for high gas prices now is the massive demand for gasoline, spurred in part by people like them," wrote Daniel Smith-Weiss of Bedford, N.H. "SUV drivers have in part brought these high prices on all of us. So I do get a small sense of satisfaction seeing them pay so much more."

"What I don't like about SUV drivers is their reckless and negligent way they drive," wrote Judith A. Gill of Baltimore, "as if to say 'I do whatever I want on the highway because you can't hurt me but I can demolish you, so get out of my way.' They don't care about gas prices. They think they are superior to everyone else on the highways and roads of this country."

"I don't feel sorry for drivers of SUVs paying huge sums to fill up their gas guzzlers," wrote Peter Bowler of Dallas. "They are half the reason the gas prices are so high and our air is so polluted. I hope the high prices will keep these enormous pieces of crap off the roads."

"Although I don't like the high gas prices that I have to pay for my cars, I don't mind a bit that the SUVs, full-size vans and pickup trucks get hurt by the high prices," wrote Ed Caldwell of Bloomington, Ind. "Some of the drivers of those vehicles drive as though they are above the law. The police are afraid to stop them because they can't see their hands or glove compartment."

"The reason that people with SUVs are not suffering more from high gas prices has got to be because they are wealthy to begin with," wrote Scott Hartman of Toledo, Ohio, who said he drives a small pickup truck and feels the pinch. "You have to be rich to be able to pay $40,000 [to] $50,000 or more for an SUV. They have money to pay for the gas."

"I would like to see gasoline prices rise to $4.50 a gallon or higher," wrote Richard Lane of Prescott, Ariz. "I would like to see a stiff tax levied to bring up the price to what people in Europe pay. This is the only way that Americans will change their gluttonous habits."

"It's amazing all the cars that I see with one person driving in a SUV on the freeway in Houston," wrote Debbie Mejstedt of Friendswood Texas. "I hope the price goes up to the same that it is in Europe. Maybe then people will think twice about their selfish gas guzzling tanks."

Like I said, unmitigated vitriol. As these comments demonstrate, the anti-SUV sentiment transcends energy prices and "global warming".

A couple of quick rebuttals. My evil and irresponsible 2000 Ford Explorer cost $11,000. We bought it because we didn't want to shell out $18,000 for a fuel efficient Toyota Camry with 60,000 miles on it. I also don't remember seeing low prices on any BMWs, Porches, or Audis. So the SUV is not the vehicle of the rich.

I love these people that want gas prices to rise to European levels. Maybe they want the higher European tax and unemployment rates as well. I'll bet the Europeans want our gas prices.

"The SUV I hate the most is the Hummer H2," wrote Scott Cohen of Melvindale..." Does this guy really sit at home and rank his hate of different SUVs? Scott, you are at a minimum, a total loser.

This business about SUV owners being bad or dangerous drivers reeks of delusional paranoia. In fact, I think that driving ability is the one trait that is constant across all demographics. Pick any group or class of people and I can find someone who will say that they are the worst drivers. Young, old, male, female, black, white, Asian, Hispanic, and I am sure liberal, conservative, republican, democrat,... No way SUVs are THE choice of bad drivers. By extension then, you would have to say that all rich people, since they own the SUVs, are the worst drivers. This is nonsense. I never noticed any extra recklessness in SUV driving long before I became an owner - and road safety is a particular peeve of mine.


Now back to gas prices. A favorite tactic of the econo-illiterate is to pit consumers against each other. First they pick who the evil one is, then they create the fallacious argument blaming him for the perceived ills of the righteous consumers. Medical costs are increasing, so blame the obese. When consumers run up credit card debt, blame the "predatory" lenders.

(Just last week, when a Red Sox fan reached over the wall and touched Gary Sheffield and another fan "spilled" his beer on him, the Boston Globe ran a cover story blaming larger beers and more beer stands at Fenway. Never pass up a chance to blame evil business. click for story)

So with gas prices rising, the econo-moronic invariably start the blame game. To them it is this simple, SUVs get fewer miles per gallon, hence their owners are irresponsibly bidding up the price of gas to these high levels. The anti-SUV crowd is unanimous on this point.

Here is how that fallacy breaks down. Last year a relative of mine expressed his displeasure with me owning an SUV. I asked him how many miles a year he drove – 25,000 he replied. I told him that I drive 10,000 a year and there are usually three people in my car to his one. So who is really the gasoline glutton here?

The econo-illits choose the metric that suits their argument. If miles per gallon is the metric, then they can condemn all SUV owners. How convenient. Figuring out total miles driven or total passengers would muddle their argument and is by necessity ignored. So you SUV haters, before you flip off the next Hummer, consider that behind those tinted windows, even a below-average sized “posse” would make that Hummer more fuel efficient on a per person basis. (Consider also that flipping off Hummer drivers could also get you shot.)

This class envy tactic never works. As much as some academics or economists would like to do it, one cannot quantify what specific consumers contribute to the price of a good. This exercise is just way too multivariate and lends itself to manufactured conclusions.

My 25,000 mile per year relative lives 40 miles away from his job. Imagine the stress on highway budgets if everyone did that. So maybe fuel efficiency is to blame here. If he was getting 12 miles per gallon, maybe he would be forced to live closer to his office. Maybe they should legislate that one cannot live more than 15 miles from their office. Or they could just legislate that cars can’t get more than 15 miles per gallon. That would do the trick. I am sure he would be amenable to all of this.

More class envy spin. What about all of these northerners spending each winter in old drafty homes? Aren’t they needlessly living up there when there is plenty of space in the temperate south? They are bidding up energy prices for the rest of the country and contributing to “global warming” more than the southerners. There seems to be a need for some forced migration here. Or maybe they should limit northern homes to 2500 square feet.

See how ridiculous this gets?

How is it that the SUV haters can bash the inefficiency of American cars and drive Hondas and Toyotas, but when elections come, they vote for anti-outsourcing and pro-union politicians? It is tough to keep up with these people.

About “global warming”, all I will say is that the theory won’t gain any traction until meteorologists can at least accurately forecast tomorrow’s temperature – never mind temperatures 10, 20, or 50 years out.

This topic is sure to be revisited. click here for ABCNEWS.com article.
Posted by CaptiousNut at 6:50 PM

There's some great stuff in some of these "classic" posts of yours. You really did a number on the whole MPG economic fallacy and the blame game.