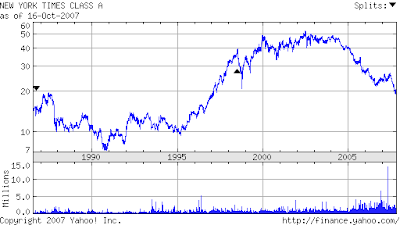 I will bet you'll have difficulty finding ANY other stock in the Standard & Poor's 500 Index that is at such a multi-year nadir.

So, will S&P boot the company out of the index and spare the millions of passive index investors from blindly subsidizing this train wreck of a media company?

I wouldn't hold my breath.

On the bright side, this mutual fund welfare, courtesy of S&P, has probably helped the demise of the Grey Lady. Another company in these straits would have had its ratings slashed, its stock price pummeled, AND had to quickly re-invent itself as a rational, profit-maximizing entity. Ironically, just about everyone who DOESN'T read The Times understands that welfare kills.

The NYT's financials indicate that it has a mere $57 million in cash against a debt load of almost $1 billion. Bankruptcy still has an outside chance. Wall Street currently has shorted around 11% of the stock's float - that's no small percentage.

If one looks in the right places...he'll find plenty of justice in this world.
Posted by CaptiousNut at 9:59 AM

Say... what does their stock value trend line look like if adjusted for inflation?!