Charged With Stupidity - In The 1st Degree 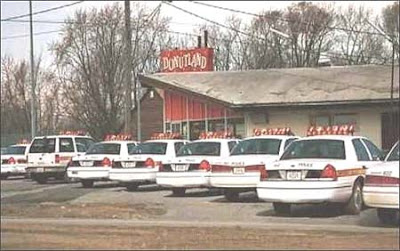 Facing its own subprime mortgage lending problems, E-Trade has sued several ex-employees, saying they improperly took along client info when defecting to rivals. For sheer smoking-gun-style proof it's hard to top the injunction-seeking Los Angeles lawsuit E-Trade just filed against Joseph S. Reilly, described as its third-highest-producing financial adviser, and his new firm, Bank of America's brokerage arm. The complaint says Reilly vacated his office so fast in late January that he left behind handwritten "to do" lists--reproduced in the pleading--that said, "Call clients using cell to determine their interest in coming w/me," and "Copy as many names #'s as possible." No comment from Reilly; BofA denies wrongdoing.

That was pretty funny. For those of you unfamiliar, financial advisers, aka "stockbrokers", generally sign no-compete clauses that specifically ban client poaching. Though in reality, the practice is as common as speeding on the highway.

This reminded me of all the stupid criminal stories I have heard over the years - like a guy who filled out his name and address on a pharmaceutical application and THEN decided to rob the store. Or a dynamic duo that tried to rob a Dunkin Donuts in Saugus, Massachusetts. Here's a decent place to read more - Stupid Criminal Files.

Videos of this genre abound. Here's a good one:

And here's another that I remember from way back. Essentially, it's a "classic".

Want to keep your brain idled and watch them? Click here for more videos.

You could easily spend all day watching and reading about these clowns.
Posted by CaptiousNut at 6:48 AM