Yet Another Homeschooling Book 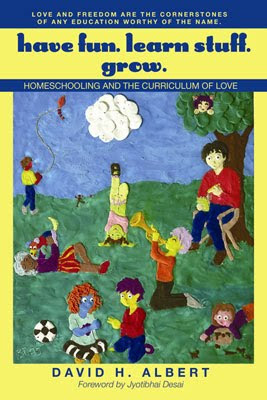 Having finished that one book I mentioned in a prior post....

I ripped through another of David Albert's today - pictured above. Link here.

I highly recommend these books to those on the cusp of homeschooling.

David Albert grew up Jewish in NYC, became a Quaker, adopted girls from India, started singing opera when he was a geriatric.....

I'll bet 95% of us probably don't know anyone as weird(!) as him; that's why his story, and his schtick is worth your time.

At my stage in the homeschooling deliberation, i.e. being already immersed in the process, I really enjoy him talking about his remarkable teenage daughters. Albert is not bragging about them, he's sharing the otherwise unimaginable possibilities of homebased education.

One girl is an amazing concert pianist, has organized benefits in furtherance of Mid-East Peace, volunteers in animal shelters, partook in tsunami relief in Asia, sings jazz,....

And that line I scribbled above doesn't begin to do *Meera* justice.

As for his other daughter Aliyah:

In the evenings, I take my older daughter (age 14) for a walk in the local wooded park by the inlet. I think a hundred years ago, they would have called this a "constitutional", though I have yet to find much that is overtly political about it.

In reality, it is she who takes me for the walk. If I were to go myself, I wouldn’t see much. Oh, there would be trees enough and plants enough, and an occasional mushroom colony on a fallen log, but truly I wouldn’t see much. I might spy a robin or two, and in the undergrowth, I’d see movement suggesting a brown-breasted leaf-wiggling wren (I know enough to know that wrens are to be found down low), and, high above, I might see movement suggestive of the green-bellied leaf-wiggling warbler. But not much else. The park is like a closed book to me, or one printed in a wholly foreign language.

But when I let her lead, as if by magic an entire world appears. Barn owl adults eye us from low perches attached to great tree trunks, triangulated by three robins, all pointing directly at the moppish hulks. The owl juveniles announce themselves noisily from branches hanging directly over the trail. Juncos are alarmed. Oh, that’s what that racket is.

Aliyah walks straight down the path, reaches out her right hand without breaking stride, and pops an moonglow orange berry into her mouth.

"Salmonberry," she says. "Sweet, but with an aftertaste."

I try one, too. Thimbleberries to the left, she points out, unripe.

"When ripened, they’ll be like raspberries, but the birds will get them first. But try the huckleberries. The birds don’t go for them as much. The bushes won’t hold their weight, and the berries are perfectly round and difficult for bird beaks to hold."

Trilliums sit by our feet, and false lilies-of-the-valley, I am informed.

"Not within a couple of hundred miles," she says, "Except in some people’s gardens."

She reaches down and plucks a few green leafy things and starts to chew. "Miner’s lettuce," she notes, "Better when young."

She hands me a piece. I wonder whether she does this when I’m not around.

There, right in front of my nose, not five feet away, are sprays of little red berries reaching upwards.

"Can’t eat ‘em. Elderberries need to be cooked, or they can be poisonous. But they can be quite medicinal."

I remember a song I once heard about elderberry wine. Never drank any though.

I have been scratched by a bushy thing.

"Watch out for the stinging nettles," she warns.

"There are four antidotes," she giggles, "And you’re practically stepping on one of them!"

I look down, and there is a six-inch long slug just in front of my right toe. I bend down to inspect.

"Mud, bracken fern, elderberry leaves, and slugs. You can rub mud on the scratches, and it will cool them. The fern and the elderberry you make into a poultice."

"What do you do with the slugs, grind them up?"

"No! It’s the slug slime. You rub it on and it acts as an anaesthetic."

"A friend of mine licked one once, and she said it numbed her tongue totally."

That sounded even less appealing. Do rural kids lick slugs to get high? I wouldn’t put it past them.

"You can boil the nettles and make tea," she says, "Brings down fever."

We move on. Snails waltz across the path in front of us, as only snails can.

"You know, after a rain, the robins leave the woods and come down to our neighborhood. That’s when you see so many of them. Worms are easier picking on a wet, newly mowed lawn."

And then we hear a high-pitched "Screeeeeeech!" And out over the water there is an eagle!

"You know the sound of the solitary eagle you hear at the end of television shows or in commercials? Well, the sound of the eagle is not an eagle. Eagles don’t make a screeching sound at all. It’s a tape of a red-tailed hawk combined with film of an eagle. The tv people do that, you know." 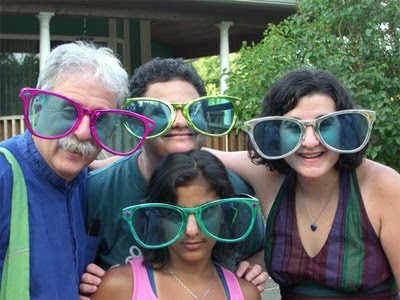 All of that from a 14 year old girl? Does she sound like any teenagers from your neighborhood? Not from mine.

And my regular readers know that I am far from one to be impressed by tree-hugging, botany-lovers....But one just has to respect her obvious expertise and the tenacity which cultivated it.

Note also the manifest surprise of her father throughout. He's homeschooled her from near birth and should know her almost better than she knows herself. One would think, anyway.

But that's what these kids do when they aren't held back; they amaze the sh*t out of you - on a regular basis.

Yesterday, my 3.33 year old daughter did 28 pages of her Kumon book - in one sitting!

And, late this night, 4.89 year old Prince C-Nut used the word *discontinued*, appropriately I must add, in a sentence describing one of today's little misfortunes to his mother.
Posted by CaptiousNut at 11:11 PM