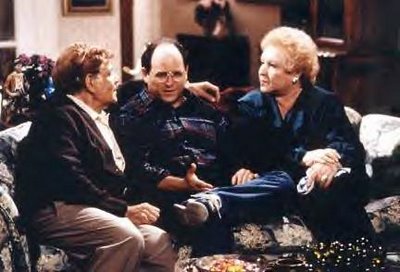 Messing with the older generation is almost always funny.

UPDATE - Try clicking here.
Posted by CaptiousNut at 7:32 AM 1 comment: 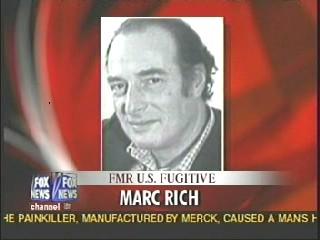 So I took my occasional glance at the web traffic referrals on my blog and saw one curious looking hit.

Somebody in Zurich, Switzerland found my recent post by a blog search of "marc rich". They were further described by my tracker as "farner pr und consulting ag".

I googled "farner" and found out that Farner is a huge PR consulting firm. Anyone want to bet that Marc Rich doesn't have them on retainer to manage his image?

Though Marc has been pardoned by President Clinton, he is still apparently afraid to come back - most assuredly for fear of new criminal charges. Here is the Wikipedia primer on Rich which I wouldn't normally even provide, but this shameless pardon was barely even mentioned by our impartial media organs.

For a second I thought that it was maybe Marc Rich himself that found my blog but I doubt that now. Lots of people google themselves; I have countless times. Greg Mankiw actually gets up each morning and does a google blog search of himself, another little tidbit that I learned from my tracking software.

Anyway I am off to Naples, Fl for a few days to play some golf and count "for sale" signs.
Posted by CaptiousNut at 9:17 PM 1 comment:

The following clips were posted by yours truly on youtube.

And now for part 2 of Congressmouse Meehan embarrassing himself, his district, and his state.

If a hemorrhoid could talk, I bet it would sound like Meehan.

Part 2
Posted by CaptiousNut at 7:53 PM No comments: 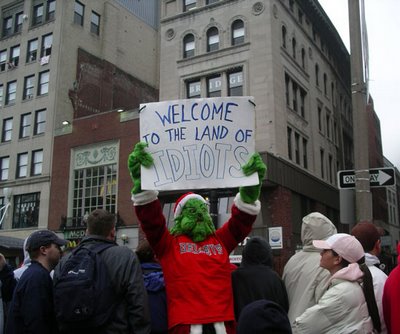 Well not really. I want to Marginalize the idiots in New England that donate to the Fund.

A couple of weeks ago, while the Yankees were in town to give the Red Sox a five game butt-spanking, Red Sox broadcasts were littered with promotions for the Jimmy Fund. It was borderline nauseating.

You might think I am a jerk for complaining about a children's cancer charity but think again. I certainly do support medical research but I do so by supporting unfettered capitalism.

Up in Boston, everyone votes with the class action tort lobby. They also support pols who do all they can to make health insurance unaffordable. People up here just don't get it. Money wasted on acupuncture, aromatherapy, in vitro fertilization for lesbians, and on malpractice and class action lawsuits is money that would otherwise find its way into cancer research. 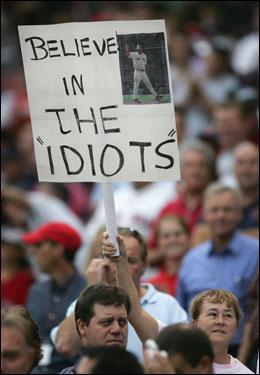 So these idiots kick back $20 to the Jimmy Fund and feel like they've made a positive difference.

Then in two months they will go vote for an unctuous lawyer for governor (Deval Patrick). 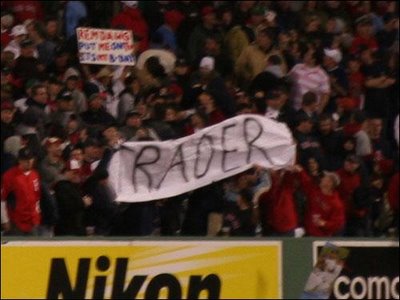 When Johnny Damon (one of the original idiots) returned to Boston this spring he was deemed a traitor for signing with the Yankees.

Note the idiotic spelling from fans in the "most educated" state in the country.

Speaking of education, I am almost finished reading John Taylor Gatto's book and will soon summarize it in a blog post. BUT I CANNOT RECOMMEND ENOUGH READING IT IN ITS ENTIRETY. His book has had a more profound impact on my mind than any other I have ever read. I wouldn't say that it has altered my life, but rather that it's given coherence and historical context to much of what I thought I already knew.

One of his copiously documented hypotheses is that government education was actually designed to make people dumb and unable to think for themselves. Of course that sounds farfetched but his claim is well-documented.

Here is but a sliver of Gatto's wisdom,

Back at the beginning of the twentieth century, the monstrously influential Edward Thorndike of Columbia Teachers College said that school would establish conditions for "selective breeding before the masses take things into their own hands." The religious purpose of modern schooling was embarrassingly evident back when Ross and Thorndike were on center stage, but they were surrounded by many like-minded friends. Another major architect of standardized testing, H.H. Goddard, said in his book Human Efficiency (1920) that government schooling was about "the perfect organization of the hive." He said standardized testing was a way to make lower classes recognize their own inferiority. Like wearing a dunce cap, it would discourage them from breeding and having ambition. Goddard was head of the Psychology Department at Princeton, so imagine the effect he had on the minds of the doctoral candidates he coached, and there were hundreds. We didn’t leave the religious purpose of modern schooling back in the early years of the century. In April of 1996, Al Shanker of the AFT said in his regular New York Times split-page advertisement that every teacher was really a priest.

Ninety-nine [students] out of a hundred are automata, careful to walk in prescribed paths, careful to follow the prescribed custom. This is not an accident but the result of substantial education, which, scientifically defined, is the subsumption of the individual. – The Philosphy of Education (1906)

Here in a brief progression is one window on the problem of modern schooling. It set out to build a new social order at the beginning of the twentieth century (and by 1970 had succeeded beyond all expectations), but in the process it crippled the democratic experiment of America, disenfranchising ordinary people, dividing families, creating wholesale dependencies, grotesquely extending childhoods. It emptied people of full humanity in order to convert them into human resources.

After digesting much of Gatto's book, some things started to click in my brain. Gatto's theorizes that compulsory government education transforms men into sheep. For instance, the fact of Massachusetts being the "most educated" (in terms of college grads) state must then explain the chauvinistic groupthink up here. (Believe me, it's insufferably worse than your local groupthink.)

Bostonians simply can't think for themselves. In this convoluted region, intelligence has been conflated with meaningless college degrees, bogus professional certifications, and worst of all reading the local newspaper.

This state didn't get dumb overnight or just last week. It has an ignomious history whose crowning achievement perhaps was being the first state to mandate compulsory government education (1850). I guess it's simply not enough for Boston's present-day events to piss me off - I have to get chafed by its history as well.
Posted by CaptiousNut at 9:39 PM 3 comments: