I'm playing in my first competitive chess tournament next month. It's a big tournament.

And yes, I'm playing in the lowest division (which is high, U1200) alongside my son.

But I am petrified of embarrassing myself - losing all my games, losing to Asian girls less then 4 feet tall, etc.

In life it's hard to do new things - excuses not to branch out, not to take "risks" can be formidable opponents.

Yeah, this isn't really a RISK or a wild adventure....but I agonized a lot over the decision to sign up.

Posted by CaptiousNut at 10:21 PM No comments:

It is very, very well done. though.
Posted by CaptiousNut at 9:20 PM No comments:

I don't care what any of y'all say....Carrie is freakin' HOT, off-the-chart HOT.

That little dude who got to sing with her didn't even get a hug???

He could have, and should have(!), moved in for a smooch. I myself would have and perhaps even planted it on her lips!

Still it's pretty cool to get to sing with her like that.

Though in all likelihood the poor kid has hit the apex of his life at the ripe old age of 11!

This happens a lot in life too.  Think Al Bundy, Biff Loman, and most of the high school jocks you grew up with.
Posted by CaptiousNut at 9:25 AM No comments: 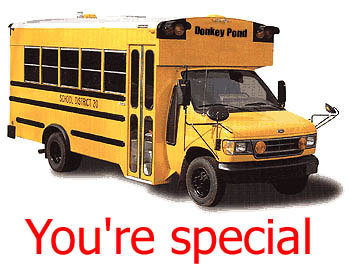 Have three kids and the summer "babysitting" is 2k per week, for 7 or 8 weeks.

We've done more camp this year than ever before.

First they both did a 2-day chess camp.

Then they did a week of VBS (Vacation Bible School). That was only 3 hours per day and was free. (We donated $200 nonetheless).

Then I sent my son to a week of chess (and soccer) camp run by a Russian grandmaster (only 23 kids). He liked it so much I sent him for a second week. (Plus our normal chess coach has been unavailable. He teaches all summer at the famed USDAN camp (costs $800 per week) on Long Island.

My daughter did a large, multi-sport camp for one of those weeks. It was at best, "okay".

My son was SUPPOSED to be doing Cub Scout camp this week starting today. We were there at 7:25 am waiting for the bus with another family....only the bus never came!

So I got a raw deal out of that. I had not only my son all day today, but also the other family's boy instead of the day-off I was supposed to enjoy! Incidentally, this Scout camp is pretty good. It's all day at the Reservation, and only costs $350 for the week including the bus. My son absolutely loves it; he's outside all day long; so we pretty much have to send him.

For the most part that's what camp busing looks like. All summer long there are these little buses zipping all over the streets. In the morning and then again at the end of the day. The prestigious expensive camps will have their names on signs in the bus windows. Some even have all the kids' names written on the windows. Whatever.

I believe that most of these camps suck. The summer is ideally for free time and most of these poor kids have already been overscheduled and harried all year long.

These camps are glorified, expensive babysitting. They are staffed by 19 year kids for crying out loud.

But if both parents are working....camp is of course a necessary evil.

On the other hand, there are PLENTY of parents that are home all day long who do nothing (order out, have maids, etc.) and still ship their kids off to camp all summer long.

Camp was not such a big thing when I was a deprived child (think "Angela's Ashes"!) growing up in Worcester, Massachusetts. My siblings and I, when we got older, did maybe 1 or at the most 2 weeks of summer camp. And I don't remember it being so prevalent up in Boston when we lived there from 2005-2010. But then again my kids were much younger and I may have just not noticed it.

For sure though, camp is huge here in New York.

While waiting at a major intersection this morning for the Cub Scout bus...

I counted no less than 100 other short buses that went by!

On the 100th one and 40 minutes past the scheduled pick-up time, one I decided to cut my losses and take the kids home.

Posted by CaptiousNut at 4:44 PM No comments: 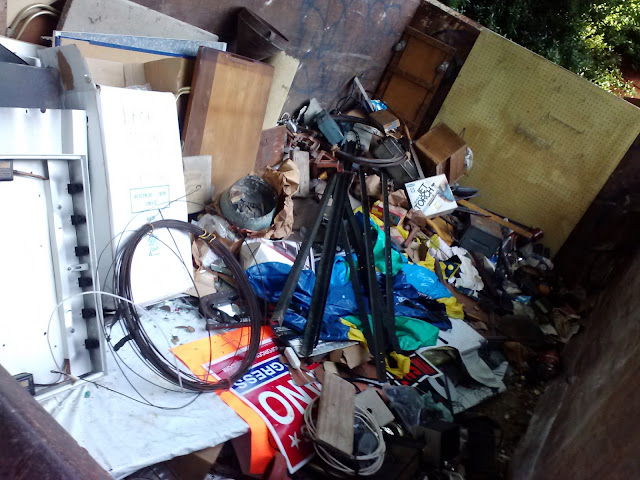 No demolition of the basement yet.

First we have to declutter the accumulated junk from my wife's family (50 year span!).

That pic doesn't do service to how much crap I pulled out already. Many of the larger things aren't in the dumpster yet because I need lifting assistance.

There were tons of old tools. Large wrenches, 50 chisels, 25 hammers, innumerable coffee cans full of rusty nails, etc. Two massive desks that had to be disassembled to fit out the narrow doorways. Steel shelves bound by stripped rusty screws that also had to be taken apart.

I was so filthy yesterday....by boogers were black!

We will fill this thing up in no time. Junk is still all over our attic, the garage, the shed, and the yard.

Still haven't decided what to do about the demolition. The contractor's $4,500 seems steep.

It looks like there are few neanderthals on Craigslist who claim they will, "beat any estimate."

I'm thinking more like $2,500 for a demo. I will call the cavemen either tonight or tomorrow after I finish emptying the basement.

Verizon wants $135 to move our internet connection upstairs. On the phone I told them to, "go eff themselves." Not really.

It's bull$hit. We pay them nearly $300 a month for cell phones, color TV, a house phone that doesn't work, and internet.

And when we had it installed originally - 3 years ago - they had the stones to charge me like $450 or something. I'm pretty sure I blogged it.

I was in shock. Cable installation was FREE every other place I lived. After all, they are going to get over $1,000 per year back from a new customer.

But I think this is one of those typical NYC-are jam-jobs. Verizon figures you live in NY....so they can charge you more. This crap really pisses me off.

Everytime I call a service or contractor for a price the first thing they want to know is, "What town do you live in?"

They pulled the same crap up in Cohasset, MA when we lived there. Some maid service wanted $1,000 to clean the entire house!

How much does FiOs installation cost where y'all live?

Posted by CaptiousNut at 9:59 AM 3 comments:

The Food Stamp Program, administered by the U.S. Department of Agriculture, is proud to be distributing this year the greatest amount of free Meals and Food Stamps ever, to 46 million people.

Meanwhile, the National Park Service, administered by the U.S. Department of the Interior, asks us "Please Do Not Feed the Animals." Their stated reason for the policy is because "The animals will grow dependent on handouts and will not learn to take care of themselves."

Much thanks to O'Jabroni for that one.
Posted by CaptiousNut at 6:31 PM 3 comments:

Do My Own Basement?

Our basement is in desperate need of being "re-done".

It's already finished....but there's mold and nastiness throughout.

But the problem here on Long Island is that these contractors sodomize you, in terms of price.

They are rude-a$$ mofos to boot!

I mean how much do you think it should cost to demo, reframe, rewire, put up sheetrock, hang a drop ceiling, and paint a basement?

I'm curious what some of you in flyover country would pay for this.

But you watch, they'll try to charge me 50k!

That's why I'm sort of thinking about trying to do it myself. Well I checked out some book on how to do it at the library anyway.

I can demo it, right?

I'm a little nervous about cutting into a pipe or wire - but I think I can handle that.

One guy, a contractor who told me he could get me a dumpster for "only $800" (!) said that the problem with demo'ing your own place is "controlling the dust."

I'll bet I can figure that out.

I'm seriously thinking about trying to find someone who lives 100 miles away to do it. They can sleep here. I'll help.

Doing any of this work myself would, of course, amount to a complete waste of my time in the long run.

But I don't think I can stomach a bunch of criminals coming into my house and robbing me for a few months or however long they drag it out.

Posted by CaptiousNut at 2:08 PM 8 comments: