When To Say "When" 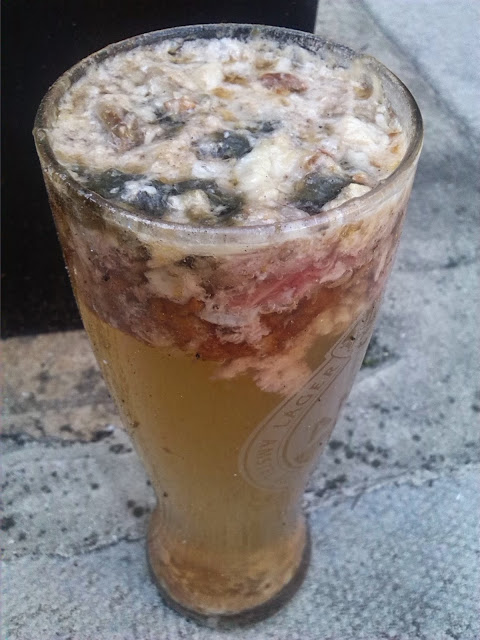 One thing that you see in London that you'd NEVER see in the States is all these people drinking GLASSES of beer out on the sidewalks (outside the pubs).

You'd never see it because our liability lawyers would require plastic, unbreakable cups.

In the UK glass is okay because the drinks cost so much and the people are so poor....that they wouldn't dare drop a beer!

I see glasses out on the street once in a while.

I know I myself use to walk out of bars in Philly with half-drunk beers under my coat, concealed under my shirt, stuck in my trousers on my lower back, etc.

I saw this particular glass near a pub the other day and figured my blog readers would LOVE To see it.

Obviously the dude (broad?) didn't want to stop drinking even though it was clearly time.

What a polite bloke, though...confining the chunks to his glass!

I remember once I was at a bar on 38th and Chestnut in Philly....

I accidentally knocked over a plastic cup at a crowded bar and smelled something very foul.

My buddy told me that he had puked in that cup!

He was one of those rare, messed-up dudes who could puke....and yet still be able to continue drinking.

When I puked, I was done for the night - and probably for the next night.

And whatever it was that I drank, if it was a little exotic....I might not ever drink it again.

I drank a lot back in the day, back in my deformative years in Philly.

My puke incidents were probably less that 8 in my entire drinking career.

I had never seen this Moronic behavior before moving to London....but it's apparently rampant nowadays.

If you want to remove all doubt and advertise that you are an idiot, this is surefire approach.

Who ever thought it was possible to make the frontwards-facing fanny pack look acceptable???
Posted by CaptiousNut at 6:11 AM 2 comments:

Would You Sell Him Life Insurance?

Posted by CaptiousNut at 12:15 PM No comments:

Email ThisBlogThis!Share to TwitterShare to FacebookShare to Pinterest
Labels: animals

Shriveling Down to Nothing - My Downward Weight Spiral 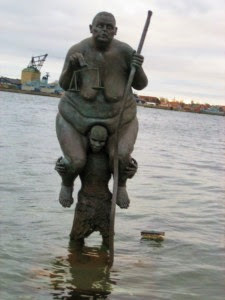 I still feel strong - always have. That statue above looks like me coming home from a bar late at night with a "new acquaintance"....back when I was 22 or so.

Anabolic steroids have nothing on 14 Yuengling Lagers plus hormonal adrenaline...

This summer, after my Sicily trip, I gave up carbs and sugar which took me to new weight depths.

But then I experimented with Tim Ferriss' "cheat day". That's one day (Saturday) where I could eat whatever I wanted, and however much of it I wanted.

But that didn't stop me from losing weight.

Then I went back to eating sugar. First a little here and there, and more recently almost back to my usual 1.5 candy bars per night.

Still no weight gain. In fact, I kept losing a little!

Even after adding bread a few times per week....nothing.

Then I stopped working out (down to 2 days per week) AND I stopped my morning protein shakes because the price, ON AMAZON, is $55 per cannister - it's only $22 at supermarkets in NY!

I'm in a downward weight spiral and nothing seems to be able to stop it.

I'm starting to look and feel "runty" and I don't necessarily like that.

Anyone else ever have this problem?

You know they laughed at me online when I referred to him as a "prodigy" in the past...

But he's certainly narrowed the gap because him and actual prodigies, don't ya think?

If you are lazy, just watch from the 4 minute mark on.

NOTE - he's only been playing the piano for 2.5 years!
Posted by CaptiousNut at 1:02 AM No comments:

In less than a week it's got 3 million views!

How about washing hands???

I can't for the life of me get my 8 year old daughter to wash her hands - not even after taking a dump.

And guys....they never wash their hands after going to the loo, no matter what number they deposited.

As much as I'd like to scream at my daughter...

I recall that as a youth I used to get yelled at by my mother for not washing up.

Then I got wise. I simply ran the sink hard for a few seconds so she could hear it outside the bathroom door!
Posted by CaptiousNut at 5:46 PM No comments:

I'm just curious how this and other *rodent launching* videos have been up on YouTube for 6-7 years...

Recall I put a clip of me drowning a rat on YouTube and within a minute YouTube (automatically) pulled it - and gave me one of the three strikes that led to a complete cancellation of my beloved YouTube channel!

PETA people are livid, of course.  They keep voting the clips thumbs down and asking in the comments, "Does anyone know if the squirrels lived???"

I'm sure they lived.  Those rodents are tough as nails.  They can fall from atop oak trees and hit the ground running.

Posted by CaptiousNut at 7:09 PM 5 comments: