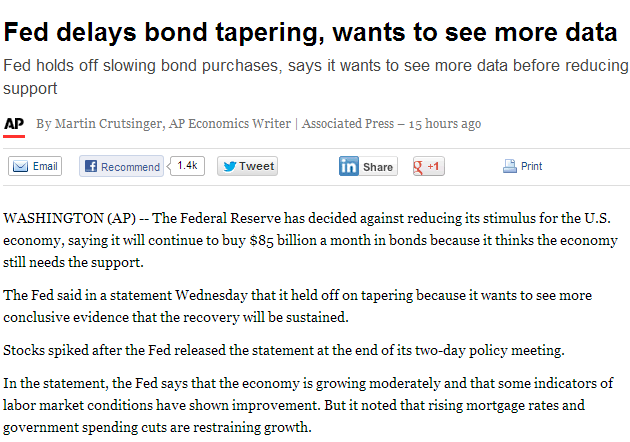 These are sad times.

The whole country is collecting food stamps and pensions from freshly printed money.

And they think because the stock market is roaring....that all is well.

The media is of course a bunch of lying SOBs; the public is fat, lazy, and even more grossly ignorant about what's really going on.

The government has grown out of control - probably beyond the point where it could ever peacefully be reined in. At this point it's pure tyranny.

In an unfunny "laugher":

In the statement, the Fed says that the economy is growing moderately and that some indicators of labor market conditions have shown improvement. But it noted that rising mortgage rates and government spending cuts are restraining growth.

The Fed (and every other institution, public OR private) has become a naked advocate for Big Gov, er for itself! And the media of course propagates this without any scrutiny. Washington press releases are essentially "news" these days.

I can't help but feel like I'm watching a train wreck, in HD, in slow motion.

Heck, I'll probably get audited for writing these blog posts one day...
Posted by CaptiousNut at 6:40 AM 2 comments:

Thanks to the Ukranian Fop for this one!
Posted by CaptiousNut at 11:07 AM No comments:


Posted by CaptiousNut at 10:03 PM No comments:

What are beach muscles?

The look good on the beach but...

I used to teach my brother about having them too.
Posted by CaptiousNut at 10:47 PM No comments: