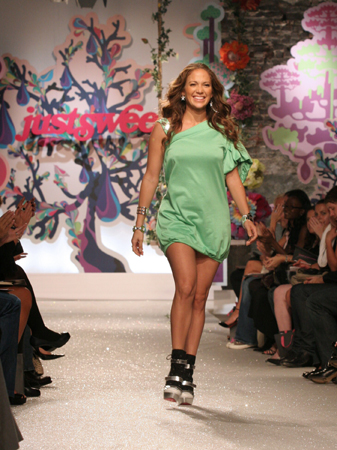 I've already mentioned this before.

I learned from Esther Gokhale that THE proper way to walk is *on a straight line*. That is, your footprints should not be on two parallel lines - railroad tracks if you will. She calls it *glidewalking* and the technique utilizes the buttocks, the abs, a perfectly aligned spine, you land on your heel, and it stretches out your hamstrings and hip flexors NATURALLY. This is in contradistinction to how most people walk - a hunched-over stumbling forward fall which they break only by raising the opposite leg with their quad muscles. Who knew you were supposed to walk with your rump???!!!

Esther basically asserts that you shouldn't have to go to yoga class to stretch out your legs and hips nor should you have to do squats to develop your hindquarters. Walking with good form is really all that is needed.

Now I've tried this. And it freakin' works! You'll feel it instantly too.

Recently, while watching a recorded episode of American Idol I noticed that when the big-butted, tight-tummied Jennifer Lopez walks, that she not only puts one foot straight in front of the other....but that she even goes a little further. Watch this clip from the 2:15 mark and you'll see, most easily on her right leg, that she practically *crosses the line* with each stride.

For a primer on glidewalking, click on and enlarge the graphic below which is from Esther Gokhale's landmark book - 8 Steps To A Pain-Free Back 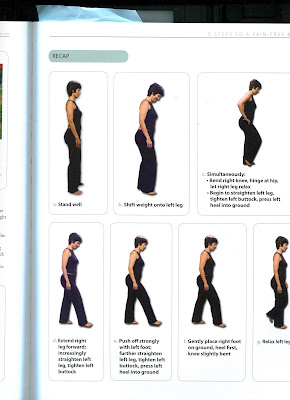 I mean her book was crazy insightful. Because I suffer from a particularly bad back (car accident) I would even go as far as saying it, for me anyway, was as on par with Tim Ferriss' juggernaut - The 4 Hour Body. And in a sense, the two books belong in the same category. No one really has time for yoga classes and whatnot. So why not learn how to stretch and develop the important parts of your body naturally - sitting, standing, sleeping(!), and walking with perfect kinesthetic form?

One thing about Esther is that unlike many of the workout gurus with sub-optimal bodies and who often hide themselves behind *clothing*....she's personally developed the body she asserts is possible: 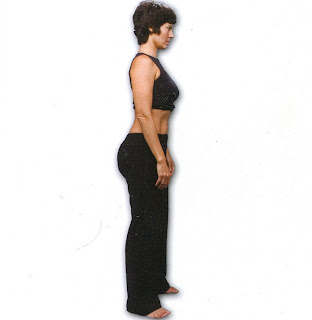 That might not be the ideal picture but it's the best I could find. Note her tight stomach and developed hiney. In the book there are even better illustrations.

You might want to skip the first 5 minutes or so of this one:

Email ThisBlogThis!Share to TwitterShare to FacebookShare to Pinterest
Labels: bad back, books, exercise

When I was a kid, I read that Early Americans left a single row of footprints when they walked, and being obsessed with the romance of the Indian life I always tried to emulate it. I never thought to correlate it to compliments received in later years on certain anatomical, um, developments ;-)

Crossing over though, is pure runway strut, an exaggeration on normal, as most high fashion is.

Yeah that clip is a little *strutty*...

But the one I saw her do recently was just casual walking and it was the near *crossing over* that caught my attention.

Just take a look at heavier and bent-over people now and note how wide their tracks are.