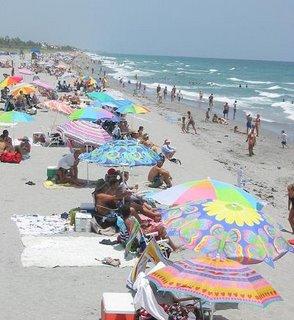 My wife and I just got back from a four day retreat in Delray Beach, Florida.

The first day there we strolled Atlantic Avenue and perused the menus of most of the restaurants. We narrowed it down to two Italian places and chose Bice over its cross-street rival Tramonti, simply because its entree descriptions sounded better.

So later that night we returned for dinner and Bice was dead but Tramonti was slammed. Clearly we picked the wrong one. Anyway, the food at Bice turned out great and well-worth the steep prices.

The next day, a local yokel confirmed for us that Tramonti was very popular, so we ended up making a Saturday reservation.

So here is what happened when we finally made it there.

We had barely sat down on an extremely crowded night, when one of the cooks came flying out of the kitchen.

He went running up to a woman seated right in front of us. He was screaming in a grandfatherly, yet Soprano-esque Italian accent,

Then he ran back to the kitchen.

Now the entire restaurant was taken aback, with everyone wondering what had just happened.

So I asked the woman, who didn't react to the nutjob at all, and all she did was point to her head and repeatedly say that "The man is sick in the head..."

Now she was, to me, a typical Floridian woman, well dressed, extremely, if not overly tanned and at least 65 years old. Amazingly her husband did nothing as well. He just summoned the waiter and paid the bill as fast as he could and left.

Regardless of what happened, at a minimum I would never have paid the bill - especially considering that I have refused to pay bills for much less than that - but at a maximum I would have inflicted some serious bodily harm on any guy that cursed like that in my wife's face.

So what did happen?

I finally got the story from their waiter, who happened to be ours as well. Apparently the woman complained that,

"...only half of the mussel shells had mussels in them..."

The waiter claimed that they had fallen into the broth and thus she was in no way shortchanged. Furthermore, the waiter even admitted that he had provoked the chef by passing on some incendiary comments from the woman.

The whole incident came off as good theatre to most of the other customers. Like I said above, this place was hopping and really a scene. It reminded me of South Philly with its noticeable preponderance of Italian-Americans, unbuttoned shirts, gold chains, and whatnot. 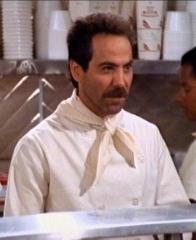 Obviously the place does so well that good customer service is less consistent than the food. In that vein I am reminded of the Soup Nazi, Pat's Steaks, Katz Delicatessen, etc.

Tramonti's is actually owned by the same people that own Angelo's in Little Italy.

It's pretty bad to have chefs running out and cursing at customers on busy Saturday nights, but I think the waiter provoking it ("...because seeing it was worth losing a $10 tip.") and giggling afterwards was equally indefensible.

How did the waiter know that he was throwing gasoline on a fire? Well he boastfully told me another story from the week before.

Some woman ordered a salad but requested "No nuts". The salad arrived with nuts anyway and she started complaining, "I am allergic....I could die...."

Well, word got back to the kitchen and that same chef came running out screaming to the woman,

You'd think the owner of this place would frown upon this crap.

Think again. The chef is the owner (or the son of the original owner).

The food wasn't even that good. Why go to Tramonti when there is superior food AND SERVICE at Bice across the street?
Posted by CaptiousNut at 8:05 PM