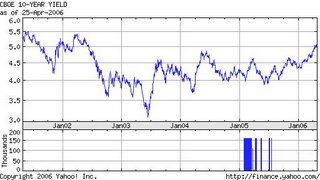 The 30-Year, though one percentage point off its low, still can rise a bunch. 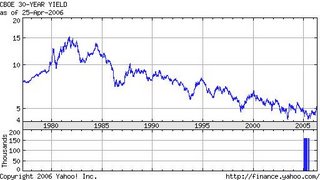 I post those interest rate charts as a warning. An investor really has to ask himself if he wants to buy anything (such as real estate) levered to interest rates, when they are still so close to a 46 year low.

When stuff is at multi-decade extremes, you just have to be a contrarian.

Look at the CRB (Commodities) index below. Again, click on any charts to enlarge. 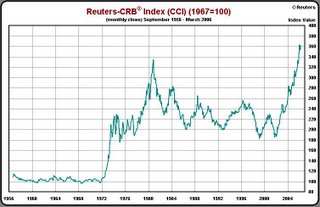 In 1999, not only were commodities at 17 year lows, they were actually much lower if inflation is factored in. In fact, many commodities, so adjusted, rivalled Depression level prices. Obviously, the CRB has almost doubled from its 1999 nadir.

Making money, or investing, has never been about much more than common sense and patience.

Back to un-real estate.

There are plenty of homes for sale in my tony hometown of Newton, Massachusetts. Realtor.com has 704 listings today (533 priced over $500k and 189 over $1 million). I will re-check this periodically.

Like everywhere else, in Boston they are building new homes wherever they can - like a single home on the lot down the street from me, the new multi-home development near Hammond Pond Parkway, a huge new condo building near the Atrium Mall, countless luxury condo conversions on the Boston waterfront, etc.

Now let's apply that common sense weapon. If they are building new construction everywhere (though not to the extent of Florida, North Carolina, Arizona, etc.), and the state is losing population, how can local real estate possibly appreciate?

Some real estate perma-bulls have argued that immigration is the wild card that's been driving home prices. I never believed that for a minute - I think it has all been interest rates and investment momentum. But supposing that was true, wouldn't Boston's meteoric housing market coupled with a declining state population serve to debunk that theory? Putting all of that aside, I think is it safe to say there will be some immigration (illegal) abatement going forward. Don't you agree?

Summing it all up, we have:

and I will throw in, 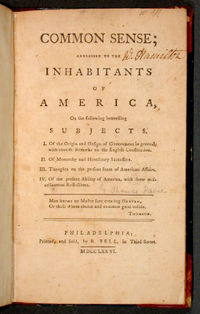 I really do pity today's first time homebuyers in Boston.

There are arguments that interest rates will never rise to past heights ever again. The logic is based on technological and financial innovation.

Of course the same stuff was said about commodities in the 1990s.