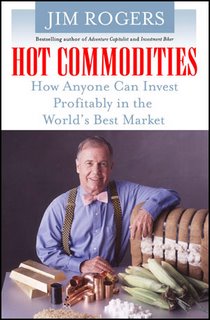 I had read, enjoyed, and learned a great deal from Jim's first two books and thus wasn't going to pass over his latest. With oil, gasoline, copper, gold,..... all exploding over the last few years, it would seem to the unknowing that this book is simply a potboiler. But Jim has been tooting the commodity bullhorn for years, although I bet Jim could definitely have written this book in a week. He made gobs of money investing in commodities, racking up 4000% for his fund in the 1970s and allowing him to retire at the age of 37. So he knows what he is talking about and that would be obvious to anyone who reads his work.

In the late 1990s, commodities were trading at Depression levels (adjusted for inflation). I read that Jim was starting a commodities fund and I seriously considered dumping some money in it. Of course, I never did and since its inception, his fund is up 170%.

So now, here we are 7 years later and instead of sitting on some nice capital gains, I am forced to consider buying now at much higher prices. Historically commodity bull markets last 17-18 years, so Jim is quite confident of another decade of great returns.

Now that is an incredibly scary prognostication. If commodities rise for the next ten years, there will be almost infinite pain in the stock and bond markets (and by extension the real estate market as well). While Jim isn't trying to convince anyone to swap all of their current investments for soy beans, lead, and coffee, he at least makes the argument for some diversification into the commodities sector as a portfolio hedge. Historically, commodities have a purely negative correlation to equities.

Much of the commodity story today is about China. Their rapidly growing economy has a seemingly insatiable demand for oil, copper, steel, etc. Count me among the many people that feel China is financial bubble ripe to burst. When it does, I will probably buy some commodities - no sooner. Though not explicit, it seems that the commodities Jim likes best are oil, lead, sugar, and coffee.

This book took me only one day to read and at a cover price of $25.95, I am glad I borrowed it from the library. I figure this a good way to recoup some of my tax dollars. I used to buy books new, read them, and then clutter my apartment with them indefinitely. Then I got wise and starting buying used books from Amazon. I read them and they cluttered my apartment as well.

Last year, I moved to Charlotte and got even wiser. They have a multi-million dollar high tech library. I can see the card catalog, reserve books, and even renew outstanding books online. When you reserve a book that is currently out, a computer will call you at home and notify you when it is back. Like I said, every book I checkout feels like a tax rebate. (Also, for IPOD and mp3 people - most libraries have huge cd collections of classical music and whatnot. I have seen individuals checking out 20 cds at a clip for obvious "intellectual property" theft. Good for them.)
Posted by CaptiousNut at 11:57 PM