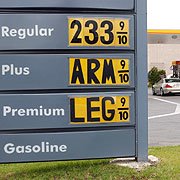 As I have noted in a previous post, gas is not at a record high when adjusted for inflation. But that doesn't stop the MSM (mainstream media) from their incessant bleat of "record high gas prices". If gas is at a record high, then so is almost everything else, including newspapers, movie tickets, college tuitions, cable television, etc.

Nobody likes to see the gas pump hit a number $5-$10 higher than normal when filling up their car. But just for fun, let's do the math on how devastating economically gas prices are for the consumer.

I can easily shave $60-$120 a month off of my budget, and I think most people can too. I know many people drive more than 10,000 miles a year and may have 2 cars in the family. Nonetheless, I would encourage them to do the math and see exactly how "devastating" gas prices really are.

Since the Sopranos are on indefinite leave, all I have to do is cancel HBO and my land-line phone to pay for the gas increase. 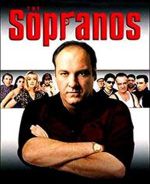 But if you have a 20 mile daily commute and drive one of these: 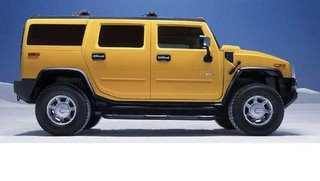 at 9 miles per gallon.....you are in trouble. I guess higher gas prices are rough on rappers and pro-athletes.

It really is amazing how many people feel that cheap gasoline is an entitlement. All of the small-minded econo-illiterate are scrambling to find out who is to blame for rising gas. They want home prices, stock prices, and the bond market to go up, but nothing else. It just doesn't work that way.

Being the outside-the-box thinker that I am, let me state that I actually am glad that gas is high. It really is very cheap to drive. Roads are crowded, no one car pools, public transit is under-utilized, etc. Mostly though, I think the major problem is that the development and maintenance of public roads is a governmental and taxing disaster. They haven't built new highways or bridges anywhere in years. I think that unless the cost of driving rises, in ten years this country will be one big traffic jam. If I were in charge..... I would make every major road a toll road and require each car to have an EZ-Pass or Fast Lane. This is the only way that you could get the actual users of a road to efficiently pay for it. The system we have now is somewhat socialist.
Posted by CaptiousNut at 10:58 AM