Clutter and the Older Demographic 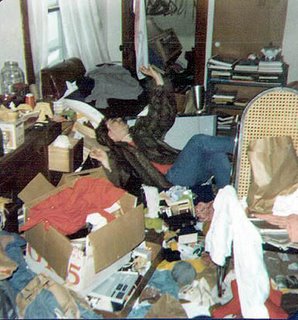 Like almost everything else, the root cause of clutter can be explained by a confluence of trends. First, it seems to be a question of age as older people constitute the majority of clutterers. Categorically, they grew up in a time of relative scarcity. The historical cheapness of today’s commodities, clothing, energy, food, etc. hasn’t quite sunk in with this demographic.

Want to annoy an older relative? Then after a meal, go throw the leftovers straight in the trash, leave the lights on in unoccupied rooms, throw old clothes away instead of donating them to the Salvation Army or whatnot, dump the bacon grease, and my sure-fire way to make your older cluttering cheap relative go apoplectic – OPEN THE WINDOWS IN THEIR CAR WHILE THEY HAVE THE AIR CONDITIONING ON.

Furthermore, clutterers cling to junk because they think everything has value. That old lamp, clothes from the 1970s, old bicycles that they and their grandchildren will never use, every single greeting card that they ever received, etc. Ever see old rusty cars adorning the lawn in some rural area? It hit me the other day when I was looking at my neighbor’s three rusted cars in his back yard – this is nothing but the rural expression of clutter. They bought that car years ago, spend hard-earned money, were going to fix it up, and then were keeping it for parts. Before you know it, it’s been twenty years!!!!

That rusty car illustrates the thought processes that lead to clutter. As I read today in a newspaper, cluttering is all about indecision. Chronic clutterers always can find a reason to keep something, sentimental value, misjudged economic value, or just the pathology of not being able to admit that something they paid “good” money for, no matter how long ago, is now simply worthless junk.

The clutter issue is so apparent to younger people and yet their older relatives are not only helpless to address it, many are outright oblivious of their problem. Don Aslett, cluttering guru and author of forty books on the subject, claims that clutter is so mentally distressing that it actually breaks up marriages.

Younger people have probably moved residences recently whereas the older set may have been in the same house for decades. Moving encourages purging or at a minimum some incidental thoughts on “why the (bleep) I still have X, Y, and Z”. If the movers who just packed my boxes down in Charlotte last week had to do the same at my parents house….. I am sure most of them would refuse, demand double-time pay, or quit on the spot. Most of these decades-in-one-house clutterers just haven’t the faintest idea of how much stuff they actually have.

Aslett also scoffs at those storage bins, sold at the likes of Target and Walmart. He sees them as enabling clutter more than addressing the problem. I found that very funny because I just bought a couple and I had all sorts of problems doing so because there were several people in that aisle to the point that I couldn’t get my shopping cart near the products. Next time I hit Target, I may revisit that aisle and start whispering to the customers, “Don’t store it – Throw it away….”, “You have a cluttering problem…”, “Your (bleep) is WORTHLESS….”, and “Storage is just a very expensive way to throw stuff out!!!!!!!!!”

Yesterday my 92 year old grandfather made himself and my grandmother breakfast. I happened to stop by and noticed that neither of them had eaten their sausage. I picked up a link to sample it and promptly spit it out. It was terrible and I asked what kind of sausage is this? My grandfather said it is “Johnsons or something…..It is good…” I said, “No it isn’t, it is terrible….if it is so good, why didn’t you eat it?….”. I pick up the sausage box and I discovered the problem – it was some veggie type of sausage (and no brand that anyone would have heard of). “Why did you buy this?”, I demanded. He then told me that he bought it at a yard sale for 25 cents. I said, “Grandpa, let me tell you something, ….even at 25 cents, you got ripped off….” But he didn’t want to hear it. The fact that nobody could stomach a mouthful, including him, could not trump his strident belief that he doesn’t get ripped off or even make bad purchasing decisions (not even of the level of 25 cents). He then kept pointing to the $2.69 price tag still on the box as definitive proof.

This Seinfeld-ian anecdote (think of the arguing Costanzas) does have a point. I am worn out from trying to help de-clutter my relatives lives. Now I just stealthily throw stuff out. When my mother was out today, I simply put some 5-years-ago-expired peach jam and 20 year old tumeric spice (you know when McCormick used the metallic cans) in the trash, of course hidden well beneath the surface. A few years ago when my wife and I were trying to de-clutter a relative, we made a pile of stuff to throw out. But whenever we turned around, we noticed the offending clutterer kept sneaking up to the pile and repossessing the junk!!!!

So while I wore myself out trying to get my parents to throw junk out these past few days, they dismissed all of my rational pleas for disposal. But eventually I came up with one argument for which they had no retort, “Why do you care if we throw all of this (bleep) out…….you know that you will rapidly replace it with other (bleep).”

And who the heck buys frozen food at a yard sale?
Posted by CaptiousNut at 4:55 PM

I am really glad that your poor family gets to remain anonymous...

mom, was that you?