Read this story about a parent’s visit to the University of North Carolina – Asheville.

I promised some rapid examples of Boston economic illiteracy so here they are.

Apparently it is illegal in Massachusetts for the electric company to stop service on delinquent customers between November 15th and March 15th. This is a typical anti-business law that hack politicians pass to “protect” the poor and elderly in those bitter winters. First of all, no one up here has electric heat. Everyone up here has either gas or oil. Electric heat is popular in new construction condos in warmer climates. If someone did have to survive a New England winter on electric heat, they surely would become destitute, for it is the most inefficient and therefore expensive way to keep warm. Ask anyone who has had it.

So I just googled “mass electric stop service november” to verify the exact dates between which the utility companies can't turn off service and I got this truly rich link to Attorney General Tom Reilly. Look at his website advice via this hypothetical question:

Utilities and Phone Service
Q: I’m 65, live by myself, and can’t keep up with my electricity bill. I have electric heat and I’m worried that they will shut off my service. What can I do?

A: In Massachusetts the utility company cannot terminate your service if everyone in the household is over 65. There is also a winter moratorium in place every year from November 15 to March 15. During those months, gas and electric companies cannot shut off your service if you are unable to pay. You may also be eligible for home heating assistance, to help pay your bills. The Attorney General has published a guide to keeping warm this winter with information on this question and referrals for assistance. To request a copy of the brochure, please contact the Office at 617-727-2200, Ext. 5354.

If somebody couldn’t pay their electric bill, my first piece of advice would be to cancel that internet service they are using to browse O’Reilly’s website.

Again, virtually no one has electric heat in New England, but this politician is so concerned with his image as the protector of the weak that he has website advice for this exaggerated, if not imaginary demographic.

What is the cost of this symbolic, political, and rhetorical policy?

Well Mass Electric says that 10% of their revenue goes uncollected. That is a very high number and I am sure much of it is related to this stupid policy.

But hey, let everyone in Massachusetts keep voting for these vanguards of the “little guy”, even if it raises every household’s electric bill. I’ll bet there were one or two deaths umpteen years ago that prompted this measure.

Moving on with some more Massachusetts economic illiteracy.

I had some random young lady crash a barbeque at my place. At one point in the evening I heard her say, “……well, he is a capitalist…” in the most pejorative way possible. Of course I had to call her on it and she melted into a silence that more aptly befitted her level of ignorance.

She is a 7 year Phd student at a local state university. What if there were no “capitalists” creating the profits, jobs and incomes whose taxes subsidize her economic welfare, more euphemistically codenamed “academia”?

I have no issue with higher education and those that choose that path. I just hate loud-mouthed idiots who are clueless as to what creates the lifestyles they enjoy. And I especially don’t like them pontificating in my own house.

Everyone with a clue knows that recycling doesn’t save money. It may save landfill space and reduce consumption of virgin basic materials, but it costs money to do this. I don’t want to burst any of the green people’s bubbles, but sometimes it is unavoidable.

To the many of the simpleton environmentalists, it makes so much sense as to border on the dogmatic. Instead of throwing out the paper and glass, we reuse it. How could it not save money? Well, when throwing it out is cheaper than the costs of recycling.

Here in Newton, Massachusetts I got this flyer on the town’s recycling program. 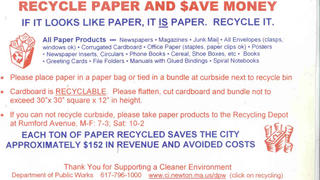 
First of all, talk about economic illiteracy, at the bottom, the flyer touts how:

Saves the town “revenue”? Do they have a clue what “revenue” is? Shouldn’t they be maximizing revenue instead of “saving” it?

Now who knows how they calculate the $152 number. Basically you would have to find out their landfill cost for regular waste tonnage and compare it to the tonnage cost of recycled paper. But I took this number on its face, called up and found out that last year they recycled 8097 tons of paper. Multiplying by the $152 yields about $1.2 million dollars in “savings” for last year.

They actually have 3 types of garbage trucks that traverse the entire town – one for basic trash, one for paper, and one for bottles and glass. So now they need 3 times the number of trucks and workers, much more insurance, and other costs (healthcare, management, etc.) Also, they have to drive these trucks for 3 times the mileage. And guess what, I did some research and found out that garbage trucks don’t get more than 5-6 miles per gallon. Is all this factored into this $152 per ton saving? I would bet considerable money that it isn’t.

Here is a query:

Are there more miles driven each year by Hummer owners or by recycling garbage trucks that get only half of the Hummer’s fuel efficiency?

So is recycling causing “Global Warming”?

Even with that dubious $152 number, I sincerely doubt that $1.2 million covers the total added costs of basically double (or triple) the pick-up work.

This is a major problem for the environmentalist movement. They are so fanatical that they constantly throw out half-baked bricolage theories and explanations which erode their overall credibility. If they want people to recycle, they should articulate valid reasons for doing so, not the myths of cost savings (or “revenue savings”).

This reminds me of a site I found on “The Wage Gap” by the National Women’s Law Center. They undermine a noble cause by including this Commi-speak at the end:

If working women earned the same as men (those who work the same number of hours; have the same education, age, and union status; and live in the same region of the country), their annual family incomes would rise by $4,000 and poverty rates would be cut in half.

What profundity – if people were paid more money, poverty would lessen.

Actually it wouldn’t because the poverty industry would just alter the definition of poor.
Posted by CaptiousNut at 10:54 PM