I Have To Brag 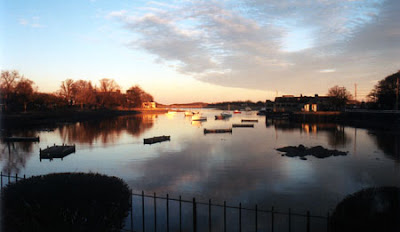 I just rented a house in the small town on the South Shore of Boston. There are only about 7,000 residents in this tony town. Tony, because, let's just say that in the ten pages of real estate listings here for sale, by page three they are already over $1,000,000.

Anyway, since last Friday when I pulled the moving truck up to my new abode, I have literally been walking on water. Obviously, we knew this new rental house was nice, otherwise we wouldn't have even considered it, but we really had no idea how great it was until we got settled in.

Now for the crowning jewel...

Attached to our kitchen and master suite, overlooking our acre of green grass, we have a 936 square foot deck!!!

That deck is almost twice as big as our old apartment in Brooklyn (519 sq ft).

Of course it has built-in benches, a fireplace, ....

You get the picture by now. This is a "CRIB"! Right down to the cable TV hookup high above the jacuzzi.

Why is the house so nice and so cheap? Well, for one thing the owner, er inexperienced landlord, underpriced his rental. He probably could have gotten $500 more per month than he asked for.

The house is so nice because the owner lived in and renovated the house for himself. He's a mortgage broker who made a ton of money over the last ten years. He told me that in his first year in the business(1996) he made $165,000. Mind you, that was well before the greatest real estate boom even got started. Unfortunately, it appears that he got a little "high on his own supply" and is saddled with too much property and too much debt of his own - hence his house became a rental. 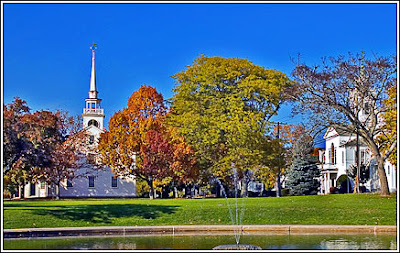 So how did we score this phat pad?

Well, starting in February, when my old landlord told us he wouldn't renew our lease, my wife and I started an EXHAUSTIVE real estate search. We effectively made a 35 minute radius around Boston and considered every single town. First, of course, we looked to buy a house. After a prolonged search, both on the web and in the car (with my two unhappy kids), we ended up bidding on two homes next door in Hingham - with one bid being live right up until we signed our current lease on July 2nd.

Once the first house that we bid on stalled, we were resigned to renting and attacked the rental market with similar gangbuster zeal. By my count, I physically visited rentals in about ten different towns - to say nothing about all the phone calls, emails, brain-picking, and web surfing that consumed all of my precious free time.

It was a long, stressful journey. So if anyone DESERVED to land a house as nice as we got, it was us.

Never mind all the money we will have saved by continuing to rent...

As I mentioned in a previous post, renting for $2,500 per month is financially equivalent to buying a house for around $416k at today's rates. And, as I also noted, this house is worth around $700k on the market today.

Hopefully my family and I are happy in this small coastal community outside of Boston BECAUSE if we don't like it here, we are going to move back to New York. It's not like we found five towns that we think we could call home for the duration. This was it.

There was nothing as brutal as the last six months we spent in residential limbo. This is my fifth home in the last seven years. I am starting to feel like I am in the witness protection program or something.

This place is so nice I hope we can stay here for at least two years and let this real estate market shake out some more.
Posted by CaptiousNut at 5:05 PM