How Do You Say "Moron" In French? 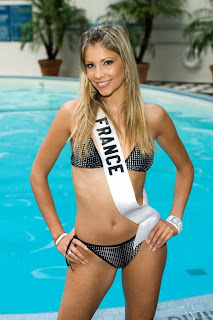 This is an actual conversation I had with a random, ugly, foreign woman today while out with my kids:

[after five minutes of small talk...]

CaptiousNut - (jokingly) What's that, a Boston accent you have?

CaptiousNut - You married an American guy?

CaptiousNut - Gee, all this time I thought 'hating Americans' was prejudicial...

CaptiousNut - Here's a prejudice for you. Up until now, I mistakenly thought that all French chicks were attractive!

Okay, that last line was muttered, inaudibly under my breath. Believe it or not, I am really quite the social diplomat out in public!

Now clearly, living in America, marrying an American, and reproducing with one ought to give her quite the buffer against any sort of "anti-American" accusation, should it not? It's just like the impunity I hold for Italian mockery. I was being ironical; it was a jest for crying out loud. But she was incredibly pissed. At least a pissed off French(wo)man is hardly at all scary.

So I wonder - what fool would marry a humorless, hideous French woman?

She must have some dowry. Or some hope chest.

Perhaps he's no prize either.

These are small towns. We'll clash again and, of course, I'll blog it.
Posted by CaptiousNut at 7:09 PM

"Abruti," in case that question is not rhetorical.