I guess the quintessential moron is one who repeatedly acts against his own self-interest. Banging your head on a wall comes to mind.

The joke that is government education, especially the collegiate level, is always ripe ground for harvesting morons. 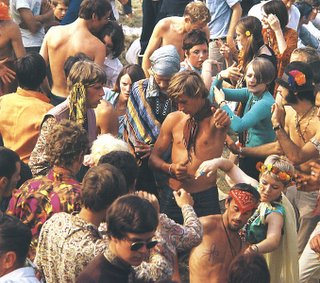 It boils my skin when I hear how schools have banned the military or ROTC from their campuses. The most publicized culprit is of course Yale. Now these schools get millions in federal subsidies directly and indirectly through federally backed student loans. I was thinking the other day how outrageous this was and how the federal government should just revoke all of their funding – especially the student loan backing. The powers-at-be of Yale just don’t appreciate the military (the whole gay issue is a ruse), in fact they hate it. Yale is likely run by pathetic 60s hippies who came of age with an antipathy towards the military. I happily discovered that others already shared my sentiment. The Solomon Amendment was attempting to do just what I prescribed – withhold federal monies from these petulant schools.

Snow: We cut taxes and it improved the deficit – contradicting what the naysayers forecasted. And now the deficit is a smaller portion of GDP than before.

(Liesman hated this answer and fired back.)

Liesman: Well what about the dollar value of the deficit?

It is tough to do justice to this in print but I will try. This little exchange illustrates why I am starting to really loathe CNBC. They have such a Commi-adversarial bias that permeates almost every second of their programming.

Liesman wanted to hit the Treasury Secretary over the head with the deficit and when Snow returned serve with the undeniable benefits of the tax cuts, Stevie got visibly perturbed. How dare Snow flaunt facts hostile to socialist propaganda!!!!!

Liesman, mental midget and terrible anchor that he is, completely glossed over what Snow said. Stuck on the deficit, he followed up with that stupid follow-up about the "dollar value" of the deficit. Which begs a worthy issue that I will get to in a moment.

While writing a draft of this blog I characterized Steve Liesman as a perma-Commi naysayer. My characterization was purely based on the empiricism of listening to him every day. I hadn't yet read his illustrious profile.

It turns out that he worked for the Moscow Times, went to Columbia School of Journalism, and has an undergraduate degree in English.

Emeril couldn't concoct a better recipe for a "perma-Commi naysayer".

So CNBC's Senior Economics Reporter lacks even an undergraduate degree in economics. WOWSERS!!!!

They pick on Liesman sometimes during programming because he is a bit of a weenie and may in fact deserve it. But to me, his economic illiteracy is the much bigger vice. If I ever debated him on TV, he might not be able to get off the mat when I was through. Way to go CNBC....great hire.

Now back to the deficit. This whole idea that we need to raise taxes to pay for the deficit couldn't be more flawed. Not only have tax cuts raised more revenue all four times enacted, econo-illiterates consistently MIS-FRAME the debate.

The fact that Congress is addicted to spending should have nothing to do with where the government sets tax levels. "Two wrongs don't make a right" is preached to 5 year olds....so why doesn't it apply to the grown-ups that run society?

Another analog. Consider the parent whose child is addicted to video games. Unable to wean him away from his Sony Playstation, the parent relents and decides to buy the geek a lot more games - to make him happy. Or when people argue that we should legalize narcotics because we can't enforce the drug laws.

Tax cuts make sense because they stimulate the economy. I just don't understand the socialists sometimes. They should be for tax cut stimulation because it will bring in more revenue that they can REDISTRIBUTE. Of course socialists don't care about the financial realities....all they care about is what tax propaganda will help them foment CLASS WARFARE.

Back to the mis-framed deficit debate. I learned the mis-framing tactic back in the fourth grade when a jesting classmate asked me:

"Do your parents know that you are gay?"

Obviously both "yes" and "no" answers elicited giggling.

Republicans have been smart to push for the recent tax cuts. Ideally, they want taxpayers to get so accustomed to the rebates that it becomes political suicide for a pol to be against the cuts. This tactic reminds me somewhat of what Robert Moses said about his huge public works projects, "...all I want to do is drive the first stake..." 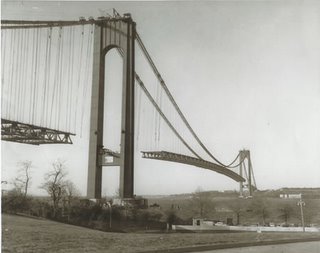 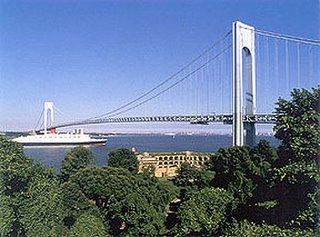 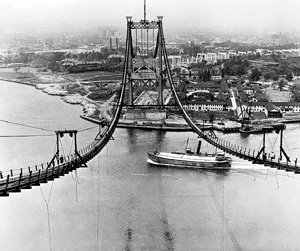 These bridges, tunnels, and highways he built were mammoth in size and ungodly in cost. Who could possibly forecast the eventual cost of the Tri-Borough Bridge or the Verrazzano Bridge? Moses, typical government agent that he was, couldn't care less about the real costs. All he wanted to do was drive that first stake in the ground and he knew that no New York City politicians would let the projects lanquish or go unfunded on their watch. They always found the money even as the costs exploded far beyond the worst projections.

So this whole push for tax cuts has been driven by that logic. Congress is really just a bunch of collusive local lobbyists. The federal government scoops up tax dollars and these wanton criminals divvy it up to suit their own perceived political agendas. Congressmen think it is their duty to bring home as much federal money as possible. Think about that for a second. The present-day Congressional metric for success is how much federal tax revenue they can have wasted in their own states.

Boil it down and Congressmen are nothing more than dirty sports agents for their districts. Don't expect leadership or healthy debate on national issues from these weasels. Goverment spending should be held hostage to pro-growth and low taxation levels - not the other way around.

Republican Senate Majority Leader Bill Frist has recently jumped on the "let's tax big oil" pig-pile. He knows darn well that oil companies aren't "gouging" and that taxes will just aggravate energy prices. But this "leader" is worried that he and other Republicans are too identified with oil companies.

This is leadership? Instead of seizing this moment to educate the public on the costs of fanatical environmentalism, the economics of energy companies, and the GOUGING of gasoline taxes (almost 4 times what big oil earns).....Frist is worried about how Big Media and really dumb people percieve him. Inherent in his reasoning are two vile presumptions:

1) His constituents don't want leadership, but rather a waffling, "finger in the wind" invertebrate.

2) That his constituents are dumb and wouldn't be receptive to a common sense lecture on the realities of energy economics.

Perhaps I am wrong. Maybe Frist is pulling a Bill Clinton. Remember President Clinton would pay lip service to big issues like Social Security reform but never take a step beyond the rhetoric. If this were the case I have even less respect for Senator Frist. I mean what is to respect about a jelly-spined pol who thinks common folk are dumb AND docile?

Settle down you Clinton apologists, I am not making this up. In the not too distant past it was very hard to find and transmit information. Before the internet, politicians, pundits, celebrities, and whoever could spew inanities with almost complete impunity. Well, technology changed all that and prompted this nugget:

"We have become hostage to Lexis/Nexis...the problem is an excess of literalism."

Uttered by none other than George Stephanopoulos (while special policy adviser to President Clinton.) Of course the internet and modern telecommunications make Lexis/Nexis look like a stone aged slingshot.

Cornelius, North Carolina recently elected a very young state representative and I remember reading his fresh-eyed indictment of the state legislature. He said something like,

"It is unbelievable.....all they do is vote for each other's pet road projects...."

The failed Coburn Amendment confirms this problem at the national level. Several analyses of its demise have alluded to the “unwritten rule” in Congress of not criticizing others' pet pork projects. It was truly astounding that only 15 Senators voted against shifting the “bridge-to-nowhere” funds to Hurricane Katrina relief. I fully blame the media who couldn’t care less about the level of federal spending. Most people haven’t a clue that there even was a Coburn Amendment – no less are aware of the disgusting vote count. Yet when a perma-Commi naysayer like Steve Liesman wants to impugn the Bush Administration, all of a sudden they are concerned about government waste.

In the past, I have argued that economics is the most important force in our lives. It determines where we live, how we live, how we vacation, how safe we are, what we can offer our children, etc. Economic inefficiency remains anathema to most people because they would never manage their lives like that. Theoretically, Big Government should be doomed but in actuality, Big Media's whitewashing has aided and abetted the plunderage. For decades they have ignored government waste and equated tax cuts with poor minority children starving and the elderly living on dog food. Just yesterday, while inveighing broadly against energy companies, perma-Commi Steve Liesman said people are freezing to death over heating costs. Liesman must be counting fictional people - I guess.

Hey Stevie, why don't you wait for the actual winter before you unleash your agitprop? 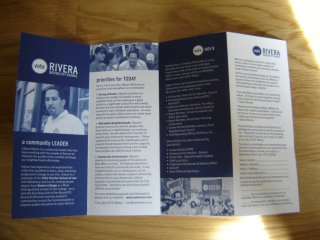 I just received a political flyer in the mail from a clown named Gibran Rivera who was apparently running for Boston City Council. Forget economic illiteracy, this guy may be illiterate in general. Read this passage from his website:

So in three profound sentences we have 4 campaign’s, 3 organizing’s, and both a “meaningful way” and a “real way”. And what the heck exactly is an “organizing campaign”? It may have been third grade where I was taught not to define a word with that same word.

His flyer is also an affront to the standards of English grammar. In it he kept using the word community over and over again. I went back, counted them, and came up with exactly 14 usages of community in a very terse pamphlet. Not only that, I counted 17 more communidad’s as well!!!

With far too many Gibran Rivera’s in our political farm leagues, it is no wonder that we end up the abomination that is our Congress. Gibran can’t so much as pen a coherent paragraph and so I doubt he’ll ever be able to comprehend the negative consequences of taxing “windfall” profits.
Posted by CaptiousNut at 8:55 AM