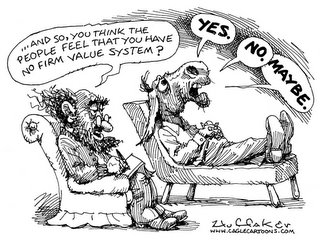 "I don't want to diminish the threat of terrorism at all, it is extremely serious, but on a long-term global basis, global warming is the most serious problem we are facing."

Chris Matthews is also one of these over-nuanced moral relativists. Ever watch him? He is one paranoid indefatigable LOSER. His nuanced view of terrorists:

"The person on the other side is not evil -- they just have a different perspective." 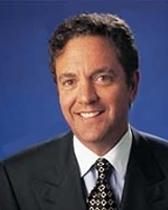 Rich Karlgaard is a great writer for Forbes. Check out his blog where you will find fresh ideas and insights not widely promulgated.

He had a great post on “zero-summers” – people that have never considered that our economic pie is a growing one or that innovative capitalism ALWAYS finds a way to more society forward.

Save fuel now because it will run out in 200 years? Crazy. 200 years ago we were using wood. 200 years from now we will be using helium 3 mined from a gas giant for use in fusion reactors. Conserve oil so we won't run out? That is as crazy as saving whales, in 1850, so we will still have whale oil available in 2050.

I absolutely loved this comment. Too many people run around worrying about stuff like saving energy that history has shown is itself a waste of “energy”. My mother is one of these types who conserves water and runs around turning off lights in empty rooms. Only part of it is cheapness and force of habit, the bulk of it stems from a misbegotten belief in scarcity. (I did a google image search on "save the whales" and got this pubescent gem.) 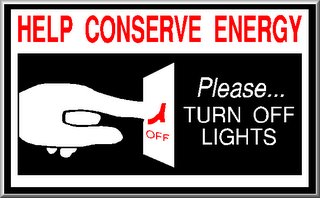 Of course she has never read anything like that whale oil comment in her New York Times-owned local paper.

Speaking of that Perma-Commi newspaper, the Times said today that:

But as always with the United States economy, it is not quite that simple.

Stock market at 4.5 year high, housing market booming, and bond market just off a 46 year high. What else is there?

The Times says it is all a mirage and goes on to explain it to the under-nuanced. Who really wants to read perpetual negative spin on a prosperous economy? Then again nobody buys the Times for its sports section either.

Let me christen another Moron Tactic – the Simple/Complex Spin.

Over-nuanced Morons consistently use this trick whereby they transmute the complicated into the simple and vice versa.

The economy is not really that complicated especially with all three asset classes percolating – don’t get pulled in by this RUSE of “it is not quite that simple.”

Now take something that ACTUALLY is complicated, like the war in Iraq. The sultans of nuance at the Times boil it all down to “Bush Lied. Oil for Halliburton.”
Posted by CaptiousNut at 12:33 PM

Email ThisBlogThis!Share to TwitterShare to FacebookShare to Pinterest
Labels: forbes