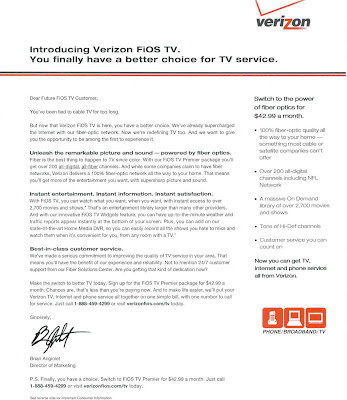 I got this letter in the mail the other day offering me Verizon's new fiber-charged cable service - FiOS TV. Remember, Verizon is primarily a phone company - the marriage of old Baby Bells, GTE and Bell Atlantic.

Now I won't switch to Verizon cable for a few reasons. One, I have RCN and it's the fastest internet connection I have ever had - and that is including T3s I've been plugged into in office buildings. I essentially can't work (trade) from home without a blazing fast internet connection. I receive streaming quotes from three brokerage applications and can't have my data pipeline clogging. Verizon will probably be just as fast but I don't want to take the risk of switching. However, I may get it anyway as a backup internet connection when I buy a new PC later this year. It was just pure luck that my house has a fast internet connection. I had no way of knowing before I signed the lease and if the speed was as bad as Road Runner in Brooklyn, I'd have to rent an office and incur those higher expenses.

I also won't switch cable systems now because who wants to be part of an inaugural rollout? I'll wait until other guinea pigs take the risk and give me the nod.

So why then am I thrilled about Verizon's entry into the cable business?

Because it provides competition for local incumbents Comcast and RCN. Even if they don't lower their prices, they'll at least have to stop raising them. Competition will also force them to pay SOME attention to customer service. I defy anyone to show me where competition has ever not had a positive effect for the consumer. Satellite television helped a little but was held back by its inability to bundle fast internet service. Also, in places like Massachusetts, snow clouds are the bane of satellite TV. One just can't get a dish up here and expect 100% reception in the winter.

If you click on the picture above to enlarge it, you'll see this advertised feature of FiOS:

A massive OnDemand library of over 2,700 movies and shows

That can't bode well for foundering Blockbuster or even NetFlix. Blockbuster is of course struggling; I don't know exactly why because I don't follow it too closely. But one thing I always hated about Blockbuster was that it doesn't have any older, hard-to-find movies from the 70s or 80s. Verizon's OnDemand library conceivably could beat Blockbuster on selection and convenience. And it will at least compete with NetFlix on convenience.

If I were a sh*tty cable company like say Cablevision, I'd be very worried...

There's definitely more that can be said on this topic in regards to net neutrality - a subject that I haven't adequately researched to hold an opinion on.
Posted by CaptiousNut at 3:24 PM

I haven't exactly done a thesis paper on "net neutrality" but it sounds like I might know more about it than you, so here's what I've got:

The idea is thus: when the intarweb was created by Al Gore, all content rode the pipes indistinguishable of all other content... therefore, it cost the same to run a webpage through the fiber optic lines criss-crossing the country as it did for a video. Now, ISPs and the like who control these backbones want to start charging different kinds of content different rates, because let's face it, some of that stuff takes up more bandwidth and the like than others.

Google, et al, are trying to have Congress pass a law that would stop this discriminatory pricing, because a lot of their business models rely on them having the power to ream their media through the internet just like everyone else. Essentially, Google wants something for nothing, whereas the rightful owners of the internet infrastructure would like something for something.

Of course, this is a basic outline of what's going on, and could be completely wrong... obviously right now people who use more bandwidth than others are already paying for it through higher bandwidth-usage fees... so it is probably a little more complicated than that, but I think that's the general idea.

Give me a holler if you do some research and figure out where I am wrong. I'd like to know myself.

I have Verizon Fios high speed. It's 15 mmegs, which is almost 3 times faster than Comcast and it cost me $45/month...I also trade and run 6 19" lcd screens of analytical software at same time with no bandwidth problems. How much quicker is RCN and what's the cost !!!

RCN advertises 10 mbs but mine definitely runs faster than that. 15 should be plenty though.

I would love to have six monitors (currently get by with two); people that don't trade (e.g. my wife) don't realize how easy it is to fill them up. Especially now when my son sits on my lap and takes up one monitor with his youtube viewing.

Don, how many PCs are you using? Two or three?

2 computers.....One is devoted to analytics. The other I use for my execution and internet use.