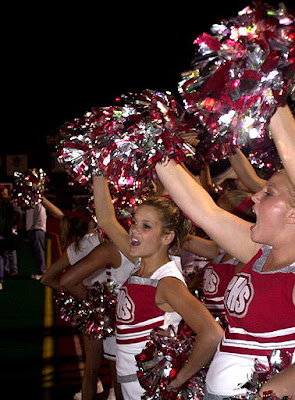 Some high school kids got in trouble or at least reprimanded for chanting "U - S - A" at a sports event. My first hunch was that their school was playing against a predominantly Mexican school or should I say against children of "undocumented workers"? But the article says it means something else. Googling didn't reveal anything. Can someone fill me in? I am so out of touch these days.

Of course, negative chants are banned,

WIAA policy states that only cheers supporting one's own team are permitted — no put-downs, no innuendos. Every BHS game has a contest manager, often an administrator, to reel in a rowdy crowd and put a damper on inappropriate cheers, signs or attire.

When my high school was getting beaten badly by an inner city school, we use to chant "S-A-Ts, S-A-Ts,..." at their fans. And of course they retorted with "F-A-Gs, F-A-Gs,..." since we were, obviously, an all-male school.

I sincerely doubt anyone was traumatized notwithstanding those ten dumb, gay kids that committed suicide right after basketball games one season.
Posted by CaptiousNut at 10:51 AM

Email ThisBlogThis!Share to TwitterShare to FacebookShare to Pinterest
Labels: usa