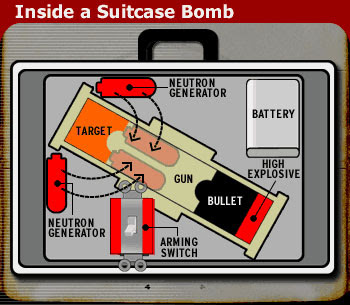 I want to go on record as predicting a "suitcase nuke" explosion in Manhattan.

No time frame will be given. Heck, if "climate change" doomsayers can be vague, so can I.

Think about it. If you were a terrorist with a three-digit IQ, dreaming of humbling the Great Satan (i.e. America), what else would be more devastating?

First of all, it would kill the most infidels.

Second, a dirty bomb would devastate the American, if not the world, economy.

The stock market would crash, 401k's would become 201k's, many jobs and companies would cease to exist. The fallout would be disastrous. Real estate would crater. Household and national wealth would plummet to impossibly foreseen levels. Tax revenue would dry up, the deficit would balloon, etc.

Think I am crazy?

Well, this gal thinks the nukes are already in America.

Flying planes into the Twin Towers was quite a surprise, was it not?

Well, it wasn't to the Arabs in Brooklyn. They knew instantly that it was a terrorist attack, who committed it, and why. They were jumping for joy on the Brooklyn Heights Promenade, taking pictures of each other with the "beautiful" burning buildings as the backdrop.

At this point, a mushroom cloud rising from an American city will only surprise the willfully ignorant. Why the heck would they pick Sacramento? 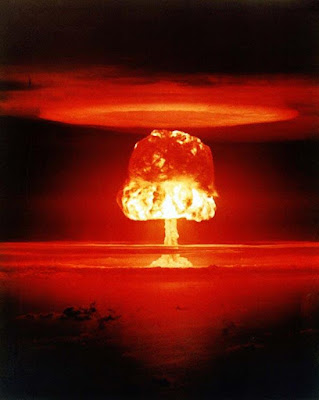 Where exactly are all of those Soviet nukes????
Posted by CaptiousNut at 11:48 AM

That "guy" is actually a chick.

Yes, I saw that mistake but didn't get a chance to change it.

Within 30 years NYC will take a hit.

But, from a traders perspective, what are the moves to make in the moments immediately following the explosion?

Sell everything you can. They'd probably close the markets for a week at least if not longer. Owning near-term puts may be problematic if the markets don't open before expiration.

Buy gold (not gold miners). The diehards insist you need physical gold, as opposed to futures contracts (because of counter-party risk).

It's really a scary thing to think about and that's why many refuse to even contemplate it.

New York is most vulnerable American city to terrorism. Just a nerve gas bomb on the subway could send it into literal and financial panic.

Pure "terrorism" is when people are afraid to get on a subway or bus; it's when everyone looks askance at the strangers next to them.

We are nowhere close to that. And I am astounded that NYC residents still elect so many doves. They are the only people that HAVE TO WORRY.

Maybe something will wake them up before a "suitcase" event. But I doubt it. New Yorkers have collectively decided to politicize their own lives. It's a clear sign of western cultural decadence.

Anything that happens will, of course, be George Bush's fault.

did you kow they just finished the supersonic elevator from dick cheneys house to the white house... neighbors and a reporter heard blast after blast for a week wondering but it slipped out..were gonna get it 16 suitcase nukes. all placed in right cities and just like the show Jericho! r u ready...