As predicted, six inches (now nine) of snow have fallen today here in Boston - so what did every 'old' person in the Northeast do last night?

Well, they ran out and bought milk, bread, and eggs of course!

If you have never lived up here, you're probably not acquainted with this phenomenon. Every time snow is forecasted, everyone over the age of sixty dashes out to the supermarket to buy milk, bread, and eggs. I should have brought my camera last night to the store because I could have taken a pic of a completely empty bread isle. It looked like it had been looted by a bunch of high-carb dieting Katrina victims. Nonetheless, I found this illustrative pic on the web, 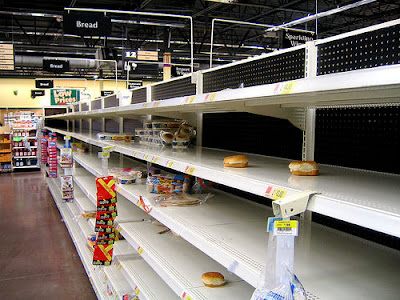 From whence did this custom emerge?

Apparently it was from the Blizzard of '78.

The Blizzard of '78 eventually gave birth to a tradition in Southern New England known as the "bread and milk runs". This was because when frantic people went to the supermarket, all the bread and milk that the markets had were gone in a flash. Thus, some of the injuries incurred because there was a shortage of bread and milk.[citation needed] In one situation, a plane had to carry supplies of milk to Providence College because all the roads to Providence College (which also services Rhode Island College and La Salle Academy, a Catholic high school in the vicinity) were blocked by the snowfall. After the Blizzard of '78, it became a custom in regions of Massachusetts and Rhode Island that whenever a severe storm approached, such as a hurricane or a blizzard, most Bay Staters and Rhode Islanders jammed supermarkets to buy bread and milk, while the markets tried to keep up with demand.

God forbid we go a couple of days without milk, bread, and eggs!!!

Could we not just drink water and eat Spaghetti'Os for a day or two?

One issue I take with the Wiki entry is that the "bread and milk" run is not limited to Southern New England. I regularly saw decimated bread aisles when I lived in Center City, Philadelphia. Also my mother-in-law in New York needs to be counted among the afflicted; in fact her unapologetic bread run last night was the catalyst for this very post.

It's bad enough having to listen to weathermen hyperventilate about every impending snowstorm; as if March 2007 was the first time humanity was ever dealt a few snowflakes. These robotic, Pavlovian shopping trips only aggravate the inane alarmism. Guess what they are going to be eating all week? 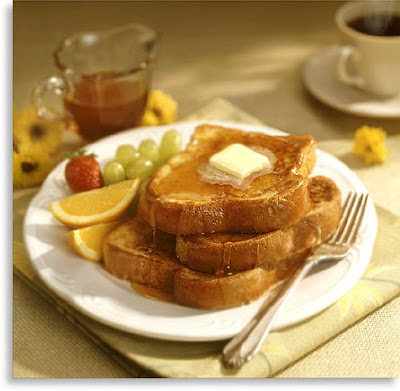 If the supermarkets were savvy, for each storm, they'd move a maple syrup display right next to the dairy or bread aisle.

Running to the store before a storm doesn't automatically make one a two-digit IQ-ed Moron, but it minimally exposes a person as a slave to custom and/or groupthink. It's been almost three decades since the Blizzard of 1978. Fifty-four deaths were blamed on that storm but I'll wager that since then, over the course of thirty years, even more people have died in car accidents on "bread and milk" runs.

Phenomena like this always remind me of what Seve Ballesteros said of his mother.

Seve, who has made millions playing professional golf, lamented that his poor mother, "...still lived in the past. All she does is run around the house turning lights off."

Devil's Advocate - Why are you always picking on the older folk; or as you call them 'fossils' and 'old coots'?

First of all, I Marginalize plenty of dumb kids as well. So you DA, and the hypersensitive dinosaurs need to relax.

Secondly, I have to pander to my base.

I know. Soon enough I too will become a jurassic old coot; my learning curve will inflect; and I'll also mutate into an incorrigible creature of habit.

But until then, I've got some Marginalizing to do.

After conversing with several geriatric members of my family, they all proudly confirmed that their "milk, bread, and eggs" runs have been a tradition since they were kids (1940s and 50s) So, as I suspected, Wikipedia is wrong in stating that the Blizzard of 1978 birthed the inanity.
Posted by CaptiousNut at 11:36 PM