John Taylor Gatto actually wrote another book back in 1992 (republished in 2002). Here's an excerpt that I pilfered from Google Books. 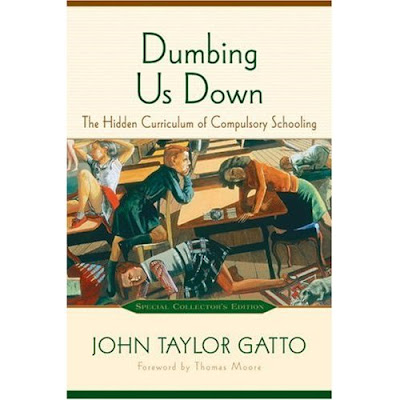 A lady named Kathy wrote this to me from Dubois, Indiana, the other day:

What big ideas are important to little kids? Well, the biggest idea I think they need is that what they are learning isn’t idiosyncratic – that there is some system to it all and it’s not just raining down on them as they helplessly absorb. That’s the task, to understand, to make coherent.

Kathy has it wrong. The first lesson I teach is confusion. Everything I teach is out of context. I teach the un-relating of everything. I teach disconnections. I teach too much: the orbiting of planets, the law of large numbers, slavery, adjectives, architectural drawing, dance, gymnasium, choral singing, assemblies, surprise guests, fire drills, computer languages, parents’ nights, staff-development days, pull-out programs, guidance with strangers my students may never see again, standardized tests, age-segregation unlike anything seen in the outside world... What do any of these things have to do with each other?

Even in the best schools a close examination of curriculum and its sequences turns up a lack of coherence, a host of internal contradictions. Fortunately the children have no words to define the panic and anger they feel at constant violations of natural order and sequence fobbed off on them as quality in education. The logic of the school-mind is that it is better to leave school with a tool kit of superficial jargon derived from economics, sociology, natural science, and so on than with one genuine enthusiasm. But quality in education entails learning about something in depth. Confusion is thrust upon kids by too many strange adults, each working alone with only the thinnest relationship with each other, pretending, for the most part, to an expertise they do not possess.

Meaning, not disconnected facts, is what sane human beings seek, and education is a set of codes for processing raw data into meaning. Behind the patchwork quilt of school sequences and the school obsession with facts and theories, the age-old human search for meaning lies well concealed. This is harder to see in elementary school where the hierarchy of school experience seems to make better sense because the good-natured simple relationship between “let’s do this” and “let’s do that” is just assumed to mean something and the clientele has not yet consciously discerned how little substance is behind the play and pretense.

Think of the great natural sequences – like learning to walk and learning to talk; the progression of light from sunrise to sunset; the ancient procedures of a farmer, a smithy, or a shoemaker; of the preparation of a Thanksgiving feast. All of the parts are in perfect harmony with each other, each action justifying and illuminating the past and the future. School sequences aren’t like that, not inside a single class and not among the total menu of daily classes. School sequences are crazy. There is no particular reason for any of them, nothing that bears close scrutiny. Few teachers would dare to teach the tools whereby dogmas of a school or a teacher could be criticized, since everything must be accepted. School subjects are learned, if they can be learned, like children learn the catechism or memorize the Thirty-nine Articles of Anglicanism.

I teach the un-relating of every, an infinite fragmentation the opposite of cohesion; what I do is more related to television programming that to making a scheme of order. In a world where home is only a ghost because both parents work, or because of too many moves or too many job changes or too much ambition, of because something else has left everybody too confused to maintain a family relation, I teach students how to accept confusion as their destiny. That’s the first lesson I teach.

And of course a confused horde is puddy in the hands of misanthropic propagandists.
Posted by CaptiousNut at 10:52 AM