You needn't enlarge the pic. Here's what Steve Forbes said about housing in the June 18th, 2007 issue.

Thanks to Fed-created inflation, housing prices in most of the country will firm and then rise. This won't save overextended subprime lenders and most come-lately speculators. But it will give much of the industry something of a second - albeit brief - wind.

Housing will "firm" and then "rise"?

The recent demise of 30-year Treasuries just shaved more than 5% off the value of every piece of real estate in the nation.

So much for a bounce! 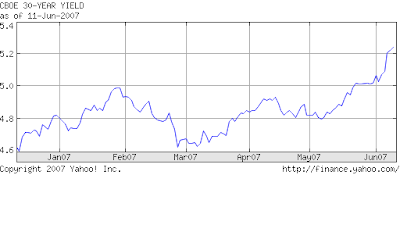 Steve Forbes is a formidable intellectual but his puerile analysis on housing shows that an unshakable optimistic bias can be just as distortionary as its opposite.

(Steve's been bearish, and very wrong, on oil prices for a few years now as well.)

Believe me, since I have been watching every tick of the housing market these last few months - THERE IS NO UPTICK ANYWHERE IN SIGHT FOR HOME PRICES. We are still in the early innings of the real estate crash.

First, housing dropped due to the momentum of its own weight - due to gravity, if you will. That is what has happened over the past 2 years.

As rates tighten the vice on a weak market, foreclosures proliferate and start to put a hurting on so-called Alt-A mortgages. (That will be this summer/fall)

The next leg down may be catalyzed by one of the following: a hurricane battering in the Southeast, a cold winter's heating bills in New England, or something like a massive municipal crisis (NJ?) that will decimate the real estate of an entire region. Or dare I say a terrorist attack in Manhattan?

The final nail in the coffin for home prices will be an economic recession. If you can't sell your house today, with low rates and the backdrop of a very strong economy, you are going to be totally screwed if you still have the "for sale" sign up when a recession eventually comes.

Remember "short the bond" is a key component of the End-of-the-World Trade. In fact, I just covered my bond short yesterday and will look to put it back on. The bulk of my trading profits this year have come from this position.

And of course, as the bond has dumped, I have been a double winner - since my "first house" drops in price along with it.
Posted by CaptiousNut at 8:23 AM

You're starting to sound like an Austrian business cycle theorist already!

What do you think of the Austrian Business Cycle Theory? In other words, how does that brief summary there in that link square up with your understanding of the theory behind what's moving the markets, as well as your observations of what is actually occuring in the market?

It's an interesting link but it has nothing to do with my thoughts on real estate pricing.

Long term, there are cycles. But in the short term, momentum is key.

My predictions of real estate price erosion are based on specific exogenous variables (like rising rates, affordability, adjustable mortgages, etc) and negative price momentum - more than they rely on any cyclical phenomena.

As for my general understanding of what's happening with the markets (stock, bonds, etc.) - I haven't the foggiest idea. My hunch is that there is a lot of funny money out there, sloshing around alternately between stocks and bonds. But that's an untestable presumption. There are too many variables out there to ever scientifically pinpoint a culprit.

My point in referring you to that link was based off of Forbes's comment that seemed to state that the Fed could clear us out of all hardships (such as a housing market crash) by simply pumping some more money into the economy. I was interested in your thoughts on monetary policy as it relates to cyclical phenomena, as that relates to price erosion. I mean, there are some "macro" reasons for why rates might be rising, affordability might be changing and adjustable mortgages might be more or less common.

Yeah, the Fed can't do anything to "fix" asset prices. That's widely known and well-established.

The macro causes of housing inflation are only a peripheral concern to me.

I care about pricing realities because I am trying to buy a home and maximize my wealth.

People can rail about Fed-created inflation all they want, but the really educated thing to do is buy assets if they are going to inflate in value, no?

(And of course get out before they deflate.)