It's Thuggish Pathology - Not Mere Hypocrisy

From Drudge this week:

As if the New York Times doesn't advance any agenda!

Their own mission statement admits it tries to "enhance society".

About The New York Times

How can you enhance society without advancing a political agenda of your own?

Devil's Advocate - Well, maybe the point they are making is that it isn't good for one individual to have such power to shape public and political opinion?

Yeah, only when it strays from their worldview. Rupert Murdoch has countless anti-capitalists on his payrool, while Sulzberger Jr. hasn't a single reporter ideologically unaligned from him. And I wouldn't hold my breath waiting for the Times to decry the political power of multi-billionaire George Soros either. Their issue is really with content - not methodology.

Actually, Murdoch isn't so out of line with the Times, at root he's a boundary-pushing smut merchant whom they'd probably embrace if he hadn't started Fox News. (But then again, he is a successful capitalist...)

Drudge briefly had another headline up on this same NYT "investigation":

Apparently the Times strongly believes in supporting domestic communists over foreign ones. 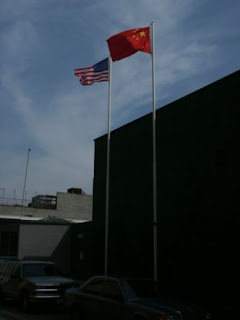 To think all these decades critics have been unfairly carping about the Times' lack of patriotism...
Posted by CaptiousNut at 8:42 AM

Society is a code word for socialism. It's obvious because the words share a root.

I can't stand journalists... they're like gov bureaucrats who insist they're "serving the people" and work "in the public interest" while capitalists/businessmen/workers are... "self-interested"? Who are private sector people selling their wares to?

Isn't it funny that the people who scream in the most shrill fashion about public service are also the people the markets (aka the people) support the least?

What is "society" anyway? Define or be defined!