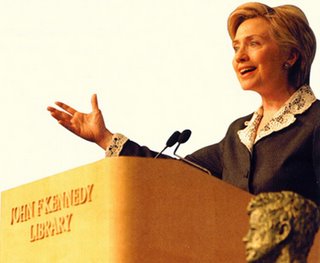 I am a very experienced trader. “Experienced” means that I have lost tons of money in a multitude of ways, and have had to dig out of some massive deficits throughout my career. What invariably goes through traders’ minds in rough patches is essentially a homerun dream.

If only my biggest long gets a takeover bid….

If only India fires a nuke at Pakistan (when I was long gold)….

If only IBM misses their earnings this quarter (when I was a bleeding short)…..

You can bet that many a ravaged trader goes to bed dreaming of whatever scenario or event could pull them out of their hole in a flash.

So while I watch today’s obsession with “Hillary in ‘08”, I can’t help but see the parallel. Hillary winning the White House is the homerun dream for more than a few people. ESPECIALLY, when this speculation was running rampant BEFORE Bush even started his second term. Four years is a long ass time…..

(For the record, I predict George Allen will be the Republican nominee. But I don’t go to bed dreaming of it.)

In 1992, Bill Clinton came out of nowhere to win the Democratic nomination. Most likely, someone other than Hillary will be the nominee. Probably at no time in history has someone been the frontrunner for four years.

Furthermore, the Hillary homerun won’t solve the dreamers’ problems entirely. Republicans are gaining at every level of government. What good would Hillary be, other than psychologically comforting, if she is facing big Republican majorities in the legislature?

But I differ from most people I guess, in that I just don’t think who the President is really matters much.

On a related note, I played golf with a guy recently who said he ran into Bill Clinton at Hilton Head (or maybe Kiawah – I can’t remember). He told me that Bill was like a dog in heat, trying to pick up his friend’s wife!!!!!!!!

why is that conservatives always have to take cheap shots at hillary? when they run out of topics to speak about they always run back to her. admittedly this one doesn't criticize her directly (aside from references to bill cheating) but the disdain for the woman is clear. it's what i call the bully mentality of republicans since they got into power. or should i call it the superiority mentality? or even the condescending mentality? note to these types, origality is always appreciated in this world, there's enough boring, repetitive ideas out there already

The "originality" is in the homerun analogy that I put forth.

"anonymous", you don't think it is nuts that "hillary in '08" is such a prominent topic these days?

captiousnut made a couple of simple points that seem to have been drowned out by your not so latent hypersensivity.

anyway, jkatz, it is extremely early, i agree. but with the current lack of talent and high profile names in the dem party right now, that's what happens. besides it comes from both sides. repubs have been talking for a year about how they have to unseat hillary in ny so she can't run in '08.

but to my original pt, you have to admit there is disgust for this woman from the right and that the right loves to kick her any chance they get