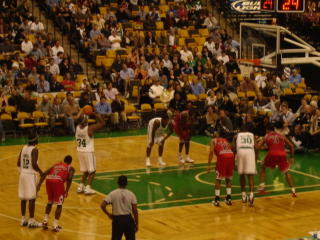 The other night I went to a Boston Celtics preseason basketball game at the TD Banknorth Garden, formerly known as the FleetCenter which of course replaced the original Boston Garden. I was forewarned that if I wanted to drink beer there I had better bring my passport. This, I think I have to type in bold because it is that outrageous:

You cannot buy a beer at the Garden unless you have a Massachusetts driver’s license.

A woman who had to be almost forty was denied beer right in front of me on Wednesday because she had and out-of-state driver’s license.

I can’t reiterate this enough, but the people in Boston are bleepin’ retarded.

I am not even going to analyze this inane policy. They are like so “WICKED RETARDED” with alcohol up here – I will give a few more examples.

Last summer, en route to a barbeque, I needed to buy a case of beer. I went to the liquor store, hauled the case to the register and was denied the sale. Again, they wouldn’t accept an out-of-state driver’s license. I actually got my 90 year old grandfather to come in the store and buy me the case. At the time I was 30 years old.

Oh, even if you are 21 and have the Massachusetts license, don’t bring your buddies in the store with you. They will card everyone that is with you.

Another example. After a round of golf, I went with a few family members to a local establishment for a few drinks. Well, we never got to a "few". After the second round of draft beer, the bartender told us that we "had had enough". We were sitting there at a table, barely talking at 4pm on a weekday afternoon. I was shocked almost to the point of speechlessness. (We went down the street to another place.) 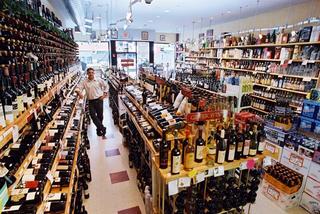 In another instance, during my sister’s wedding weekend, I went to the "packy" and put $200 worth of liquor and wine on the counter and was refused the sale.

At the Warren Tavern in Charlestown, I was with a group of people and kept going up to the bar to order drinks. I was getting them five at a time, 2 Guinness, 2 gin and tonics, and a Kettle One on the rocks. After my third trip, the wench barmaid said to me, "YOU are drinking an awful lot..." Some regular the bar said to her, "He is not drinking all of those drinks…he is buying for the table..."

The MORONIC barmaid actually thought I had had fifteen drinks. Yeah, there is nothing like alternating between vodka, beer, and gin all in about an hour.

Even when her idiocy was pointed out politely by a regular, she still snapped at me, "Well you still have had a lot." To which I responded that I was staying across the street. Never mind that 3 drinks is very far from most people's notions of "a lot". She was rude and reluctant to serve me the rest of the time.

When the bill came, I looked at it, remembered her rudeness, and left a 14% tip. Five minutes later a bouncer came over and threw the check back at me. He said:

"The bartender wants to know if you are serious about this tip..."

Now I had had a few drinks so I double-checked my math and went up to the bar.

CaptiousNut:"First of all, you have been rude all night. And secondly, 14% is not a bad tip..."

CaptiousNut: "You want me to fix the tip?"

She brought the pen over and I reduced the tip to zero.

Almost everywhere in Massachusetts, it feels like the bartender is doing you a favor by serving you. The thing is, Bostonians don’t realize how convoluted this is because none of them have ever been anywhere else. I have lived in several cites and traveled a bit so the alcoholic idiocy here is most apparent – as it is to anyone else with some perspective.

But again, this is such an insular and parochial society, the dopes that live here just take it all for granted. It is all they have ever known.

Remember that Red Sox fan that had an altercation this year with Gary Sheffield of the Yankees? The Boston Globe immediately ran a front page article on how they have increased the number of beer stands at Fenway Park, implying that the beer and Fenway should be held culpable for one idiotic fan’s actions.

The new owners of the Boston Red Sox have greatly expanded alcohol sales at Fenway Park, adding at least 16 new stands where beer is sold since taking over in 2001, according to the city licensing board. The team has also increased by a third the size of beer cups, from 12 ounces to 16 ounces. 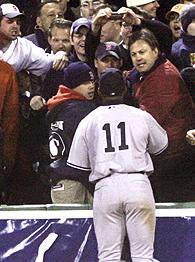 I think Yankee Stadium should deny beer to everyone that has a Massachusetts license. Maybe that would send a message to the dopes that set policy up here.
Posted by CaptiousNut at 10:52 AM

That's some weird stuff. I have been to other parts of Mass... but have never stayed in Boston for more than 1 hour.

Now I am tempted to go there for a getaway weekend. lol

Waaaah. Do your job properly, bitch, and you'll get a decent tip.

BTW, great blog. I've lived in this area all my life and I can't wait to escape to New Hampshire. The line about "groupthink" is right on the money. Reading the letters to the editor of the Boston Globe makes you wonder what planet most of the writers live on.

WHENEVER I AM GOING ABROAD I ALWAYS LIKE TO LEAVE FROM BOSTON, BECAUSE IT'S SUCH A NICE PLACE TO GET AWAY FROM.

This is a great article, the Celtics one is right on. People travel from different states all the time to watch sport events, you'd think they would serve you without a massachusetts license.