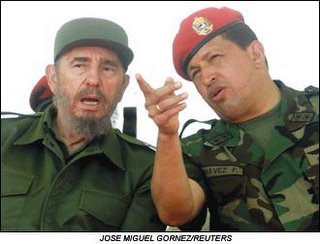 "Why would it matter where it comes from?" said Bridget Durkin, 70, who lives alone in Quincy and relies on fuel assistance. "Venezuela is doing a good thing for people."

I thought they cared where oil comes from? Remember, evil oil companies are not to even disturb the caribou in Alaska, crustacea in the Caribbean, and they are definitely not to subsidize terrorism. 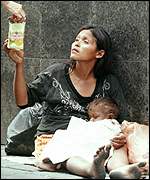 People are starving in Venezuela with a poverty rate conservatively estimated at 35% (USA TODAY said it was 50% in that link above). Why help the rich United States? Maybe they should send pics of warm and cozy southeastern Massachusetts residents to the millions of cardboard box denizens in Hugo’s Venezuelan utopia.

Do the Massachusetts Morons want cheap oil or not? The parent of the Boston Globe editorializes in favor of $3 per gallon gasoline. They are all over the map on this one. Companies shouldn't drill for oil if it upsets birds and whatnot, BUT discounted heating oil can be taken from terrorism-sponsoring dictators.

And from the other side of there mouths comes warnings of “risky foreign indebtedness” and how oil subsidizes terrorism.

Is it illegal for states to conduct foreign policy? By all means yes. But the larger picture is the vast irony and hypocrisy the whole escapade illuminates.

We already buy oil from Venezuela and other dictatorships BUT they are brokered by private individuals and companies – not politicians. It is a distinction with a huge difference. Imagine rogue politicians trying to negotiate separate peaces during wartime.

What is the proper response? The whole thing was a ruse to get President Bush to preclude or at least condemn it. It's nothing more than an unsophisticated attempt to make him look unsympathetic and in the pocket of big evil US Oil. Bush did the smart thing and brushed it aside. There is now $24 million less in Hugo's war chest and I guess that is one way to spin it positively.

So where did this illegal heating oil deal come from?

As always, follow the money. It was brokered by a sham non-profit run by Joe Kennedy. I know....it's shocking to see a Kennedy involved in Massachusetts BS.

I say it is a sham because Joe Kennedy makes dough (400k in 2003) from these transactions. He will undoubtedly mark up the heating oil, masked as delivery fees no doubt, and skim a good chunk of change for himself. It's funny how much "non-profits" can line one's pockets. 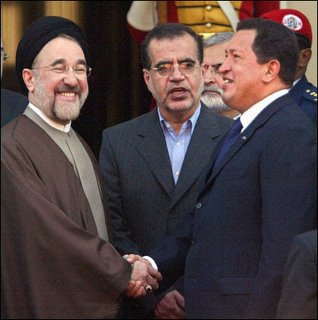 Click here to learn who Hugo Chavez really is.

So we have to fret over China’s human rights violations and stop out-sourcing but the blueboods in Massacusetts don’t care one iota about Hugo’s crimes against his own citizenry?

IT IS ALL ABOUT PUSHING A STEALTH SOCIALIST AGENDA. 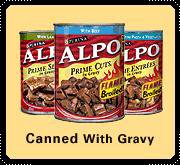 Again, the whole thing is a political stunt. THE POOR ALREADY get heat assistance, as explained on every single heating bill. Moronic Attorney General Reilly even tells the freezing destitute residents of Massachusetts that you don’t have to pay your bills at all. All the poor has to do is stop eating the Alpo for a second and log onto his website to find out how.

Utilities and Phone Service
Q: I’m 65, live by myself, and can’t keep up with my electricity bill. I have electric heat and I’m worried that they will shut off my service. What can I do?

A: In Massachusetts the utility company cannot terminate your service if everyone in the household is over 65. There is also a winter moratorium in place every year from November 15 to March 15. During those months, gas and electric companies cannot shut off your service if you are unable to pay. You may also be eligible for home heating assistance, to help pay your bills.
Posted by CaptiousNut at 12:52 PM