Happy Earth Day, You Heathen Socialists! What About Your Externalities?

Yesterday was Earth Day and I almost didn't notice because of the unqualified success of my Big Media withdrawal program (which I can't recommend highly enough).

Here's what keeps reminding me of the modern Earth-fetishists - my blog gets near 100 hits per day, just from losers downloading this Day After Tomorrow pic from my blog. 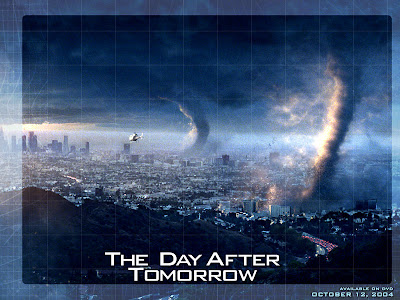 Even worse, I can see that these kids (presumably) are finding my pic under "wallpaper" searches. So they want to plaster their computer screens with images of a climate change apocalypse.

Me? My wallpaper is a magnificent family picture from my daughter's baptism.

I really feel sorry for the millions of young people drunk on Greenism. I see them all over the blogosphere. What kind of loser 20 year-old is sitting around worrying about penguins and atmospheric carbon dioxide levels - not to mention getting the facts all wrong anyway. I was occasionally seen as a nerd growing up (an accusation hard to avoid for most of us toting a 300 IQ), but my introversion never rivaled the pathetic alarmism of today's young "environmentalists". I urge them to go have a beer, stalk some members of the opposite sex, or dare I say "go get a job and make some money". (I worked near forty hours a week when I was in college).

I pity these kids, first because many of them are have been innocently brainwashed by depraved socialist adults. But more so, I pity them because they are traveling a road toward lifetime disillusionment. They are the analogues of 60s hippies who thought everlasting happiness was a simple recipe of narcotics, nudity, Hendrix, and "peace". 60s radicals are cranky today precisely because of all the bankrupt ideas they inhaled in their youth.

Here's what will happen to today's green hippies. In twenty years, when the "climate" is the same and perhaps their trust funds dry up, they will look around and realize that while they were bracing for the end-of-the-world, many of their peers will have developed their careers, bred families, and found contentment. They'll be just as bitter, crusty, and alone as most of today's college professors and newspaper writers. 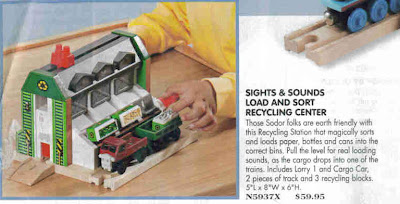 Look at this toy I espied in a catalog my son was perusing.

Sixty bucks for a "recycling center"? Tell me that price doesn't include a Moron Markup...as well it should.

On one level they are absolutely correct.

It really is all garbage.

Here's what I say to Morons now if I detect the green infection (and y'all can use this line without expressed written consent).

I inquire, "Do you worship the sun, moon, and stars as well? How about the wind or forest nymphs?"
Posted by CaptiousNut at 11:20 AM

"I was occasionally seen as a nerd growing up..."

You have to read the story about Cameron Diaz and Drew Barrymore on the Cybercast News Service. On one hand very amusing-- on another very sad that these dipsticks get attention for their blather. Sorry I can't give you the link but you have to read how Barrymore gets excited taking a dump in the woods because it's so, um, natural or something. I can see crusty Lionel Barrymore spinning in his grave.

Yeah that link is a classic.

Pooping in the woods isn't so "environmental" either. What the real greens do is go camping, poop in a bag, and carry it home to flush.

Bloomberg's initiatives, introduced by one of your, The Governator

I am firmly against clean air and clean water!!!

In all seriousness, cleaning up the NY harbor and reducing traffic, though co-opted by "environmentalists" are issues that most everyone cares about - even people aware of the lunacy of human-induced global warming and the many others that accurately recognize government energy initiatives as socialism in drag. Let's not forget that socialism is a bankrupt ideology with its own, more destructive, "pollution".