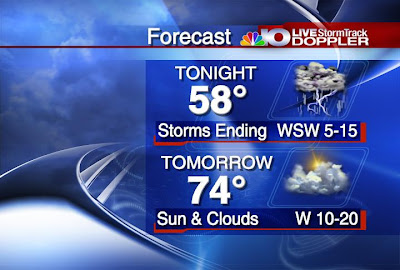 My father drives out fifty miles each way to my place once a week to spend time with his two grandkids and to "help" me in general (get work done, relax a bit, etc.) It's a win-win situation for all involved and I greatly appreciate his visits. But...

So today at 10:45am I watch him pull up to the curb. He's wearing shorts even though it's 59 degrees. It may have been 80 the other day, but wardrobe selection probably ought to be made based on current weather. It reminded me of when I worked at a golf course in Philadelphia. Without fail, the first few sunny days of spring saw tons of stupid kids (college, high school,...) show up at the course wearing shorts and freezing their *sses off. They'd come into the clubhouse at the turn, if not sooner, and ante up for a jacket to at least warm up half their bodies.

Why do Morons opt to guess the weather forecast when they could spend one second ascertaining what meteorologists have called for?

So my father is not only wearing shorts, but also a light blue jacket. I chided him,

CaptiousNut - "Dad, a good rule of thumb is that if you need to wear a jacket, then it's not a 'shorts' day."

Now my son usually drags Grandpa down into our basement where his cache of toys is. He makes his grandfather stay down there for hours on end. After my son's nap, he immediately demanded that Grandpa take him back down to his toys for round two of basement time.

I usually try to stay detached when I have "help" and concentrate on losing money in the market, but today I could not ward off interjection. It's bad enough that Grandpa didn't dress warm enough to say, take my son out to the park, but apparently he didn't even dress warm enough to visit certain rooms within the house!

CaptiousNut - Why didn't you turn the space heater on if you were cold? It's right there in the middle of the room. It's been used almost everyday for the past six months.

Again, I try to disengage myself from the "help". Who could say no to such a trifling grandchild demand? They go down to the cold basement.

An hour later I hop down to check on them. The heater is still not on. My father is sitting in a chair right next to it. I holler,

CaptiousNut - Dad, why didn't you turn the heater on? What the heck do you think it's for if not to warm the room when needed?

Many horses won't even let you lead them to water - never mind get them to drink.

By the way, I could go on for a while about Grandpa's idiosyncrasies. He is blog fodder incarnate.

I'll bet your family members are cut from the same exact cloth.
Posted by CaptiousNut at 6:21 PM

Email ThisBlogThis!Share to TwitterShare to FacebookShare to Pinterest
Labels: fossils