Even Their Little Theories Are Bunk 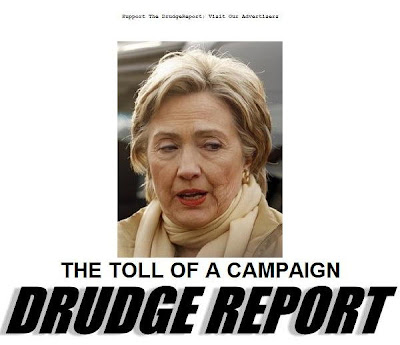 That's a snapshot of this morning's Drudge Report. She looks 75 years old, does she not? Click the pic to enlarge.

I have to laugh every time they put an unbehooving pic of Hillary Clinton up. In fact, I usually save them for future personal use. So far I have an entire little folder of unflattery.

Here's why it's funny. Not long ago, after a barrage of Drudge headlines to the effect of "Hillary leads election fundraising", the New York Times and other pinheads suggested that Hillary had now learned to use Drudge to her advantage. Now that was complete nonsense. Matt Drudge, by no means a loner, absolutely hates Hillary Clinton and always has.

Know-nothings were assuming that a fundraising advantage meant anything at all. Look at the New York Yankees or the New York Knicks. Look at Howard Dean's fundraising advantage from back in the 2004 presidential election; the guy didn't even get nominated. I don't know how many times I have said it, but money doesn't mean squat. Money is always the scapegoat of idiots who least understand it.

So, not only did the Morons assume these Drudge headlines were both meaningful and positive for Hillary's campaign, they wrongly assumed that Hillary had tamed Drudge to her advantage. 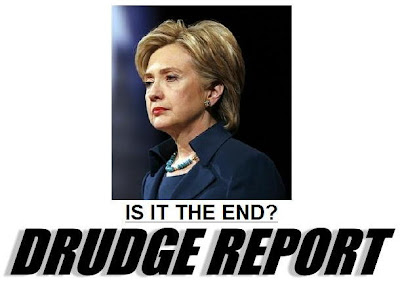 Mr. Drudge is laughing at Hillary every chance he gets.

And he's probably falling out of his chair at the suggestion that Hillary is wagging him.

UPDATE - This post has been updated here.
Posted by CaptiousNut at 2:14 PM

Yet you, unlike the Morons, know what's going on in Drudge's head.

Yes, you're contradicting yourself.

I am always skeptical of people who defend Morons.

And you topped off your confusion with an ad hominem.

If you say so. But how can I really KNOW that you are a "hominem"?

For all I know you are some robotic virtual Moron trolling about cyberspace.

I've advanced my theory (and evidence) on how Drudge loathes Hillary. Please present your evidence to the contrary.