Why Did He Choose Miami? 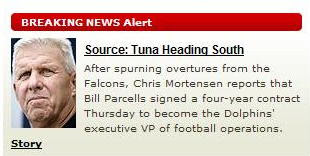 Two days ago Bill Parcells was about to sign a contract to join the management of the Atlanta Falcons. Withing hours, he got an offer from the Miami Dolphins that was more *palatable* to him.

So I ask, why did he chose Miami - sporting a record of 1-13 this season - over nearby Atlanta? 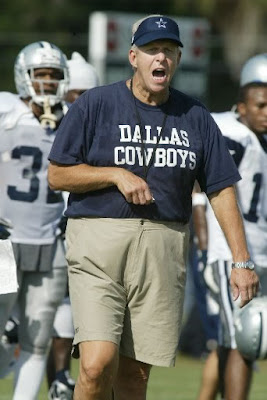 Have you been to Miami? Well, it's hopping these days. There are plenty of awesome restaurants on South Beach. I love it down there and back before I had two kids, Miami was pretty high on my list of places I'd like to move to.

Look at Coach Parcells' paunch above (back from his skinny working days) and tell me whether he decided with his head or his stomach.

Of course, if another Bill, say Bill Clinton made such a choice, my omniscience would be blaming an organ other than the stomach.

Back to Parcells. He seems to me one of these guys that simply doesn't know when to hang it up. By his past standards, he essentially failed coaching/managing the NY Jets and then again coaching the Dallas Cowboys. One more unprofitable tenure in Miami and it'll palpably diminish his prior accomplishments.

He'll sort of resemble the last bigwig who also came via Dallas to save the Dolphins - Jimmy Johnson. 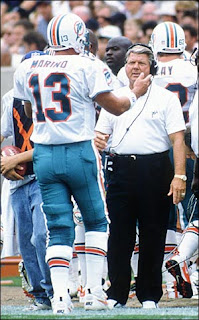 Speaking of saving ocean mammals. Pathetically, my blog gets the most hits these days from juveniles downloading this pic which I linked to in an old post.
Posted by CaptiousNut at 1:17 PM