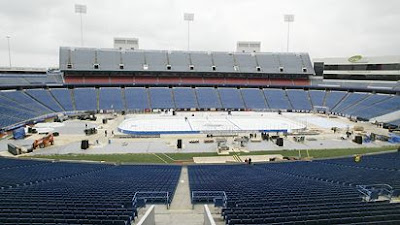 Just when you think you've heard it all....

I just saw this on ESPN.com. They are staging an outdoor hockey game in Buffalo, NY.

At the moment, I can't think of anything more Moronic than sitting outside, in a Buffalo winter, watching a dying sport, from worse angled seats!

Here's what transpired the last time they endeavored this - link:

Back in November 2003, when the NHL first held an outdoor regular-season game in Edmonton, the temperature plummeted as the evening game time approached, prompting some discussion about whether the game between the Canadiens and Oilers should have been played at all.

Players were so cold, some wore toques (then-Montreal netminder Jose Theodore being the most notable of the toque crowd). Trainers had hot soup and tea on the bench and players changed their long underwear between periods. 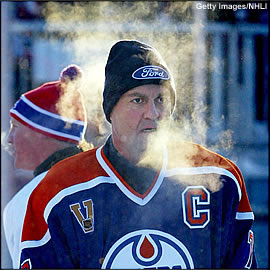 Even without giving a hoot about the players, it's a profoundly stupid idea.
Posted by CaptiousNut at 4:55 PM