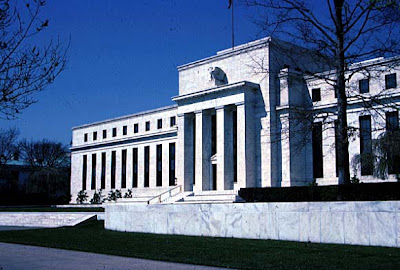 The Federal Reserve is "injecting liquidity" to ease the banking/credit/mortgage crisis, right?

Who among the lettered hasn't read that somewhere?

Well, it's all garbage. Realize that while on one hand, the government is making highly publicized little debt purchases, on the other hand, it is selling, er underwriting, make that CREATING OUT OF THIN AIR, a ton more new Treasury bonds. Remember, we need them to finance our deficit spending.

So it's difficult to understand why investors would get all excited about the Fed temporarily buying up a few billion in government securities, when we've got a Federal government that's simultaneously and permanently issuing and then constantly rolling over many, many times that amount. It's an escape into dreamland to believe that Fed actions have any chance at all of providing more "liquidity" when the Federal government's deficits suck up in a matter of weeks every bit of liquidity that the Fed has provided in a year. These Fed actions are nothing but marginal tinkering around the edges of the global financial system, and investors are starting to catch on.

If investors think the Fed buying up a few billion of Treasury and agency debt means a hill of beans, they might do well to remember that the U.S. government is running up annual deficits in the hundreds of billions. In fact, the U.S. Treasury will float tens of billions of new debt in December alone (most of which will be sopped up by foreigners, who have increased their holdings of Treasuries by well over $200 billion in the past year). This will be mixed in with refinancings.

Last week, for example, the Treasury auctioned $21 billion in 3-month bills and $20 billion in 6-month bills. In doing so, the Treasury offset every bit of the Federal Reserve's actions this week, even if it turns out that the $40 billion "term auction facility" represents new liquidity and not just rollovers. Why aren't investors just as interested in that? When the Fed does open market operations, all it's doing is buying up (temporarily or permanently) a tiny fraction of U.S. Treasury debt and replacing it with currency and bank reserves. But every time the Federal government issues more debt to finance its deficits, the new issuance cancels out any beneficial increase in liquidity the Fed could possibly provide.

More interesting is to watch what happens on Thursday. That's when we get $34 billion of repos coming due. If the Fed does little more than $20 billion through its "term auction facility," that will put the total for the week at $40 billion, versus $39 billion expiring, and it will be clear that this whole maneuver is simply a way for the Fed to temporarily refinance its expiring repos using a slightly longer 28-day maturity, rather than any effort to actually increase the amount of reserves.

In any event, banking conditions aren't likely to change even if $40 billion in additional 28-day repos actually materialize. Indeed, a Bloomberg report noted "A Fed official told reporters that the U.S. central bank's efforts won't add net liquidity to the banking system. The plans are aimed at buttressing so-called term funding markets, such as for one-month loans, rather than overnight cash." Should be interesting.

Finally, it's worth repeating that the total amount of outstanding repos has increased by only $18 billion since March, nearly all of which has been drawn out as currency in circulation. Most likely, the Fed will enter a "permanent" open market operation on the order of $10-20 billion at some point in the coming weeks to formalize that increase in outstanding currency. That move will probably be met by ridiculously over-hyped reporting as well. But it's entirely predictable.

In short, Wall Street analysts aren't paying attention to the data if they believe that the Fed is "pumping" hundreds of billions into the economy to provide some kind of "safety net" for the banking system or the mortgage market. Is it really too much to ask that they make some attempt to understand the subject about which they opine incessantly?

As for the Fed itself, it's a great gift to offer people hope, but a great disservice to offer people false hope, and I think that's what the Fed is doing. What's going on in the mortgage market is not a crisis of confidence that we can talk ourselves out of - it's a problem of structural insolvency, where many borrowers literally don't have the means to service their debt over the long-term, because many of them were counting on rising home prices over the short-term. By acting as if a few billion in repos will substantially change this equation, the Fed is raising hopes, and setting the markets and the economy up for disappointment that will be far worse as a result. Bernanke would be better off admitting that the Fed has no chance of providing meaningful "liquidity" when the Federal government is issuing Treasuries at ten times the rate the Fed can absorb them. At that point, Americans would see better that the resources we need to invest, compete and become a financially sound nation are being hoarded by the Federal government and sent up in flames.

The guy also has another recent article titled Vanishing Act - Are the Fed and the ECB Misleading Investors about "Liquidity"?

I really do pity the Morons who not only read the news but actually believe it.

The Government can't do squat for you. Don't ever forget it.
Posted by CaptiousNut at 12:22 PM

Where is the real C, and what have you done with him?

Well said and reasoned. You should be Fed Chief!

The hyperinflationists are likely incorrect. The popping of the credit bubble could cause a deflationary spiral in stock prices and eventually commodities spiraling back down to earth, in addition to a collapse in the stock indices.

The government could TRY to print their way out of this mess, but it won't solve the problem, and it would instead cause the hyperinflation that the gold bugs fear.

The price of oil is a geopolitical issue, not necessarily just a result of the decline in the dollar. The price of Gold is a speculative bubble. My point is the price of specific things isn't necessarily inflation per se. Inflation, strictly speaking, is alway a result of an increase in money supply.

As the credit bubble deflates, the TOTAL money supply will dwindle and then prices in general (including those overvalued equitiy prices) will have to deflate. This is a bad time for "buy and hold" suckers, and likely those that "buy and hold" gold are going to get their heads handed to them if they buy right before the bubble pops.

Why wouldn't gold see a price increase as investors flee to safety, inflation or deflation playing out?

Furthermore, doesn't money become more valuable in a deflationary environment? Gold, being money (or behaving like it, anyway), should perform well in such a situation then, right?