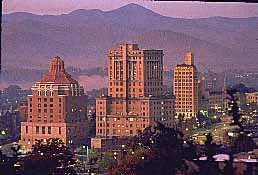 Unfortunately I am moving my family (not by choice) back to Boston this summer. So we are trying to do as much as we can down here before we start serving our sentence in that bastion of bitterness. Last weekend, we ventured to Asheville, North Carolina.

It is a beautiful part of the Appalachian mountains, that is almost spoiled by the kooks that populate the area. Asheville is a place whose reputation precedes it. Having been to New Paltz, New York, I knew what to expect: dirty white college kids with dreadlocks, old tiny cars ridden with political bumper stickers, T-shirts like this, very lazy street musicians, girls without earrings, flyers for trans-gendered conferences, etc.

I turned on the television to some Asheville channel and what did I get – a documentary lecture on global warming. I open the hotel restaurant guide and I must have seen the expression “locally owned” fifty times. “Locally owned” is commi-speak for “not owned by evil national corporations.” I glance at a local newspaper and these are the headlines:

US Troops Accused of Arms Theft in Columbia…

Secrecy and Propaganda Sweeping US…

The paper was the Asheville Global Report. I went to their website today and got this:

Unless something dramatic happens right away, the editorial collective of Asheville Global Report is sad to announce that this will be the last issue. We're not kidding.

Many of you reading this message may be familiar with our pleas every fall and spring for public support to cover our operating expenses. And miraculously, for over six years every fundraising season has found the newspaper literally snatched from the jaws of death by public support. Perhaps we have described this dependence and have desperately begged so much in the past with somehow surviving each time that by now a "cry wolf" syndrome has set in. But the fact is that every single time — every season — this desperation has never been exaggerated.

But this time it's different. It's been bad before, but never this bad. This is not a "Spring Fund-drive" letter. We're seriously in crisis —bankrupt with no guarantee that we'll be able to publish next week. We're publishing this statement as one last attempt to immediately rouse the support we need to continue. The situation is that we owe our printers thousands of dollars, rent is due this week, and we have to decide if it's time to figure out the best way to cut our losses by redirecting our attention to paying off our debts and rebating our subscribers.

This past year has seen a marked decline in support for AGR — in community funding and in the level of volunteer commitment needed every week to produce the newspaper. It's been so disastrous and unsustainable that we're now forced to ask ourselves if we should be reading this lack of enthusiasm for our efforts as a sign that people generally don't care whether or not the paper's around.

We're fully aware that it is no easy task to run an all-volunteer, non-profit, weekly newspaper. Maybe that's why you don't see more newspapers like ours in other cities. We feel lucky that we've managed to get by this long the way we have been doing things. The reality is that we always seem to have just enough volunteer power to churn out the production of the newspaper, but absolutely no one dedicated to raising money, writing grants or soliciting advertisements. We have no salaried employees, and none of us can personally afford to finance this operation. And it's pretty hard making sure all our bases are professionally covered at AGR at the same time as keeping ourselves personally afloat with meager-paying, part-time work and by keeping burn-out just out of reach.

We admit that this is not a sustainable management model. But in order for things to change so that this isn't the case, we need to know right away that we're still even wanted and that we'll be given the chance to do it. So unless people step up and donate or advertise RIGHT NOW, AGR's demise is imminent. Look at this would-be farewell as our last message in a bottle for help. Hopefully, enough loyal, generous readers will read this and respond with emergency donation money to buy us some time and keep us going for a couple more weeks. We hope this happens, while understanding that this is not a sound, long-term strategy, but a last grasp, break-the-emergency-glass measure. If not, thanks for your support all these years, good luck out there, and goodbye.

Obviously that is the type of article that I can’t link to, since the site may be gone tomorrow.

There was one response posted (not by me):

Well, in the market place of ideas, apparently your distorted perspectives are just something that people aren't "buying." Not all that much different than a company marketing a product that has no viable market and the company goes under. Maybe if some of you are introspective enough and have minds that are open to other perspectives, you may well understand that your product is not viable... I seem to recall a statement that if ignorance is bliss, then liberals must be in nirvana... good luck finding real jobs that contribute to society. Then y'all can simply join the multitudes of street people in Asheville who think they deserve to be supported by those whom they ideologically detest. I am happy to hear of your impending demise...

On the subject of imploding newspapers. The New York Times is going to charge for online access to much of its content, $49.95 a year.

There have been rumblings of this off and on for quite some time. From back in January:

"It gets to the question of how comfortable are we training a generation of readers to get quality information for free," Arthur O. Sulzberger Jr., the paper's publisher, is quoted as saying in the article. "That is troubling."

This Sulzberger lives on another planet. From a speech he gave in February.

On the charge of liberal bias, Sulzberger laughed.

"I hear more complaints that the newspaper is in the pocket of the Bush administration than that it is too liberal," he said.

Maybe he should read his own paper. In July 2004, his own Public Editor penned a column titled, “Is The New York Times a Liberal Newspaper?” with the upfront conclusion of “Of course it is.”

The Times was careful not to make the entire site restricted to paid subscribers. Maybe they think their editorial page is the big seller for the paper. I have no idea. Overall this is not a very risky move for the Times though. If their website hits drop and advertising suffers more than they take in from paid subscribers, they can always go back to the all free model. Correct me if I am wrong, but didn't television networks survive for years solely on advertising dollars?

Anyway I don’t want to make Times bashing, although a cottage industry in and of itself, a focus of my blog. I think that this move towards a paid subscription model is a dubious business decision; it reeks of arrogance, and demonstrates even further that the MSM (Mainstream Media) doesn’t understand the internet paradigm shift. If the Times was smart they would focus on lowering their bloated editorial budget and expanding their customer base.

Great job. You are a fabulous writer. I need to check-in more often. This is good stuff.