So two weeks after trying to push “Blogs” as a business topic, the May 22nd issue features the cover “Evangelical America. Big Business. Explosive Profits.”

I guess the mention of two large churches gives anti-Businessweek the cover (pun intended) to sneak an article on “evangelicals” into a putative business publication. This article is as extracurricular as CNN’s Inside Politics discussing who the next pope should be.

I started reading anti-Businessweek years ago to help me trade the financial markets. I don’t know if the publication changed or if I just became more aware of the incessant off-topic political, cultural, and social commentary injections. It could also be that the cooling of the economy and stock market has really challenged the publication to produce relevant content. (Last year it seemed like half of the articles were about the presidential election.) Whatever the case, anti-Businessweek doesn’t help me trade stocks anymore and it consistently fails to edify me on anything concerning business or economics.

Even when they do address a pertinent topic, like this week, the arguments are vapid and the conclusion is predictable.

Why can’t the title just be “Safety Net Nation”? Why the loaded editorial snip about what “so many Americans” think, about President Bush, and about the nebulous “Ownership Society”?

I guess I am just too hung up on the title of the magazine – Businessweek – but I would expect an article on social security to be rife with economic and financial facts, statistics, and arguments. The article begins by portraying some 66 year old waiter disillusioned by his 2000 stock market losses with this profound insight into the partial privatization of social security accounts,

"If people are left to their own devices, we'll become top-heavy with poor people." Silli says. 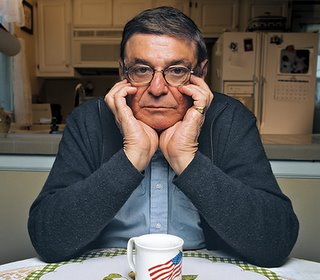 Note the coffee cup. Is that really his mug with the flag on it or is it a prop?

Next we get an indictment of private accounts from a 30 year-old “Republican” woman,

…It’s too risky…No one knows how much there will be in the end.

It is worth noting that this is the formula for hack partisan journalism. Find and highlight some dissenter who supposedly resides on the other side of the argument. In this case a young Republican. I know a boatload of people that made serious money in the bull market, yet anti-Businessweek is not going to mention anyone like that. Young Republicans against partial private accounts? I am sure they exist, but I have yet to meet one.

So after two anecdotal and contrived indictments of privatization, we get this nugget of wisdom,

…in a world that’s already pulsating with economic uncertainty…Safety Netters include plenty of card-carrying Republicans and independent swing voters, and the group may represent a broader swath of America than the White House imagines.

Now that sounds foreboding. Too bad we all can’t live in the other more certain “worlds”, I guess. How much BS is in that final sentence? It combines the words “may” and “imagines”. A mere five paragraphs into this alleged business publication it is clear that the authors “may” be presuming, projecting, and “imagining.”

Next comes the formulaic push poll, from a non-profit of course, that finds that 67% of Americans want guaranteed healthcare. So what. By my count, 82% of golfers want the sun to come out when they hit the first tee. There is still no sign of an economic fact, statistic, or argument. This is like a Superbowl recap that fails to name the teams, players, or score.

I will end the suspense now – the article never gets to the economics of social security or any other part of the “Safety Net Nation” and the political innuendo couldn’t be more pervasive. The authors headline “The Sellathon That Didn’t” which one has to assume is some reference to Bush’s inability to thus far “sell” his idea for partial privatization. I say assume because the authors make this assertion/headline and then gloss over that particular subject, instead focusing almost completely on naysayers.

But skeptics, among them prominent New Democratic thinkers, counter that America's safety net can be both modern and market-based without piling still more financial burdens onto the stooped shoulders of Joe and Jane Average.

I am a news junkie, yet I have never heard of “New Democratic thinkers”. So I just googled that and came up with only two hits. One was from the Daily Kos “encyclopedia”. I won’t link to it, but let’s just say those bloggers think Ted Kennedy is a capitalist pig. Also, why are these obscure “thinkers” characterized as “prominent”.

While federal spending on the safety net for the poor has grown briskly, it hasn't kept pace with society's needs.

Among the groups whose faith in the market dipped most are three key Bush constituencies: baby boomers, college grads, and suburbanites.

Safety Netters… view private accounts as a giveaway to Wall Street and a gamble for their children and grandchildren.

And there are the burned investors of the Baby Boom generation, who want some government safeguards from the serrated edge of globalism -- from corporate downsizing to vaporware pensions and rampant outsourcing.

But there's a glitch in Rove's machine: Polls show that, rather than flocking to Bush over Social Security, the under-40s are growing skeptical of his approach.

If polls show this, why not mention one? Too lazy to even include a push poll?

Then there are disillusioned techies who once wanted government to get out of the way and let them get rich by age 30 but who now favor a federal role in shielding them from the excesses of capitalism.

“Excesses of capitalism”, “serrated edge of globalism”, “rampant outsourcing”, “a giveaway to Wall Street”, and spending for the poor “…hasn't kept pace with society's needs.” – that is why I called them commi authors.

The screed continues with a portrayal of Bush as a risk-taking gambler who has always had the wealth of family to fall back on.

To George W. Bush, a Texan who revels in the myth of the wildcatter, running risks in pursuit of the big gusher is a quintessential part of the American character. But as the scion of an aristocratic Eastern dynasty, the budding young tycoon always had a network of family friends and relations to call on.

I guess this is suppose to imply that Bush doesn’t and couldn’t understand the plight of common Americans in “a world that’s already pulsating with economic uncertainty.” How Bush grew up is not relevant in any honest discussion of the facts and economic realities of social security. The problems of our social security system were there before Bush was elected and will be there long after his term if nothing is done.

This reminds me a bit of a conversation I had last year. I was trying to explain to someone how we need more free market forces in healthcare. I used the example of corrective laser eye surgery. That procedure is not covered by healthcare and thus its cost has crashed from over $2000 per eye to around $350 an eye now. What response did my great example invoke, “You sound like Bush…” I told this guy that these ideas have been out there long before Bush was elected and they stand on their own merits.

A couple of other point before I end this fisking.

In April, the Dow Jones industrial average hit a new low for the year on stagflation worries, and the major indexes gave up most of their '05 gains as investors fled from risk.

Maybe anti-Businessweek should take a look at the stock market once in a while. There have not been any ’05 gains at any point this year. The indices rose in December and sold off in the first week of January. Only for a couple of days did a few market indices get back to around unchanged for the year at the beginning of March.

So investors lost gains they never had and then “fled from risk”. Apparently the stock market is synonymous with “risk”. Could we say perhaps that here anti-Businessweek has fled from facts and editorial oversight?

There is one sentence in the article that treats Bush’s partial privatization plan fairly. How do I know this? The authors explicitly tell us.

What the White House proposes, in fairness, is not a complete swap of a public retirement supplement for a private one.

“fairness”? Hah. That is great. A factual reference to Bush's plan has to be qualified by "in fairness". 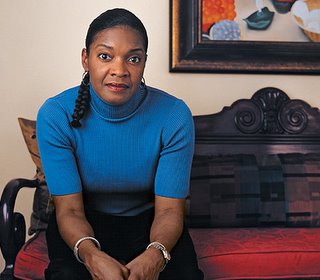 Karen Marshall Hudson, 43, of Houston, worked for 12 years as a bank vice-president at Chase and was a manager at Enron when it crashed, wiping out a chunk of her 401(k). She is now director of community outreach at the Houston Metropolitan Transit Authority. While she likes the idea of investing a portion of her payroll taxes, the Enron experience left her with a diminished appetite for risk.

Lest anyone forget, Enron is the lodestar or posterchild for the anti-business crowd. One, out of 14,000 public companies commits fraud and anti-Businessweek will never lay the issue to rest. Does anyone really think that Karen was randomly selected?

I wish this blog was more about social security and less about partisan psuedo-journalism, but reading this article last week put me in a sour mood. Social security may be a complex socio-political problem but it's a very simple economic one.

First of all, there isn't and never was a trust fund. Social security revenues have never been segregated. They get lumped in with all other government tax revenues. The whole "I paid in....so I should get my benefits..." doesn't hold water. No one ever paid in, they paid their social security taxes to the government in exchange for only the promise of future payouts. These people have forgotten the major intermediate step - that they elected politicians for 70 years that squandered their money and effectively reneged on all promises. Today’s youth and future generations will end up bearing this burden. It amazes me that anyone with children and/or grandchildren, perhaps the editors at Businessweek, could rationally see social security as a mere political football.

As this article mercifully ends, the authors lament:

But in today's hyper-partisan climate, the fight over the ownership agenda has taken on a larger dimension…

If these authors want relief from the “hyper-partisan climate”, maybe they should step out of the Businessweek office for a few minutes.
Posted by CaptiousNut at 6:01 PM