As a youth in Massachusetts, it didn’t take me long to see the predictability of local newscasts. It was the same everyday, someone got shot in Dorchester, and somebody got stabbed in Mattapan, some days it was vice versa. Reporters would be on the scene and get comments from the victims’ families. Why news stations thought their audience wanted this same dribble everyday was beyond me. Partially I think it was born out of journalistic laziness.

Nowadays this is referred to as “template news” and it extends way past nightly local newscasts.


If that isn’t a template, I don’t know what is. To me, “template news“ is a powerful disincentive for consumers to buy newspapers. Why read a paper when you know what it is going to say?

Newspapers have been losing readers on a persistent and widespread basis for some time now, to the tune of 1 to 4 % nationwide over the last year. For links, click here, here, and here.

The reasons for newspaper decline are multivariate (competition from cable news, the internet, “template news”, political bias, etc.) and the publishers’ excuse is as lame as they get. They cite Do Not Call legislation as the culprit responsible for subscriptions declining.

The Wall Street Journal article linked above states that as much 60% of new subscribers have been signed up via telemarketing. But some basic math implies that papers are still signing up new subscribers and therefore the problem is really existing customers not renewing. Every business has new hurdles to clear each year. It is not like the Do Not Call List sneaked up on them. I am sure they implemented failed counter-measures, which go conspicuously unmentioned. To newspaper executives, it is much more palatable to blame an exogenous event for the business falloff, than it is to blame themselves.

“Maybe our politics offends some readers…”

“Maybe our news gathering budgets are too high…”

“Maybe we haven’t embraced the internet…”

What is the category?

If you guessed, “Things a newspaper executive would never say to explain declining circulation...”, then you are correct.

In fact, true to their elitist core, now the New York Times is trying to tout the quality of its readers, at least to its advertisers. Furthermore they are trying to change the metric from a circulation model (number of papers sold) to a readership model (number of times a paper is read, per sale). I can’t find the exact statistic, but they have determined that each paper they sell gets read by 3 to 4 people, highest in the industry, and they want their due credit. This may make the Times management feel better about themselves, but it won’t sway any advertisers. They are already aware of how often a paper gets read and it is already priced into their rates.

This metric switch (to a readership model) is nothing more than a marketing ploy quite redolent of some of the bull market dotcoms. Many of these upstart internet companies incessantly touted their price-to-eyeball and price-to-click ratios. That old metric called profit? That was defunct. Okay, maybe this analogy is a stretch, but the similarity lies in the self-aggrandizing metric selection.

The MSM has been excoriating corporations about accounting and financial transparency practically nonstop since the Enron debacle. Yet ironically enough, the New York Times won’t breakdown its editorial budget for Wall Street analysts. Its editors obviously spend a boatload of money ($80 million per year?) on unknown travel and opinion column expenses. The Times management clearly doesn’t want analysts or shareholders to demand or even suggest any fiscal prudence. Remember the Times is a publicly-owned company. I guess shareholder rights and corporate transparency only apply to OTHER public companies.

UPDATE – Remember my blog on Internet Luddites? Well a mere week later, the New York Times weighs in on blogs. Click here for article. Guess what they think – well it isn’t much different from the content of that anti-Businessweek article. They even used some of the exact same expressions like, “…should be a clear wall between editorial content and advertising.” Perhaps there is a talking points memo on blogging making the rounds. Talk about “template news.”

Who is the exalted author of this latest blog-bashing screed? One Mr. Adam Cohen, a guy so web savvy that he doesn’t even have an email address.

What next? Is the Times going to have this guy... 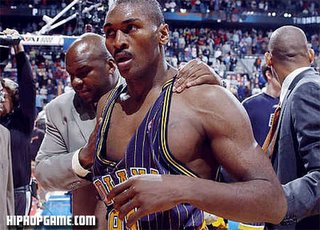 ...write an editorial on anger management?

Let me just say that the New York Times total readership model should be adjusted. They should net out the buyers and readers who are only interested in the crossword puzzle. Furthermore, I think the total readership number should then be reduced by a coefficient of constipation. I am serious, they can hire a scatologist to estimate, based on readership demographics, how many readers could be using the Times primarily as a laxative. From this data they would have to revise downward, the readership numbers because if reader number 1 gets the paper first and is in the constipation demographic, then there is no way readers 2,3, and 4 will touch that paper.
Posted by CaptiousNut at 2:56 PM