Last week, while waiting in line at a Bank of America branch, I glanced up at a prominently placed dry-erase board to inspect the day’s advertised mortgage rates. It wasn’t a second before I was accosted by a bank rep asking me if I was buying a home and needed a mortgage. I was shocked. In 15 years of personal retail banking I have never seen anything like it. Next time I go there, I will be sure to turn my head far away from that board. This is akin to avoiding eye-contact with aggressive panhandlers.

UPDATE – The next time I went into the bank, upon making a deposit in my son’s account, the pubescent teller tried to sell me a 529 account. Still perturbed by the aggressive mortgage push of last week, I impolitely told him not to worry about my son’s college savings. After all, I am making him go ROTC. 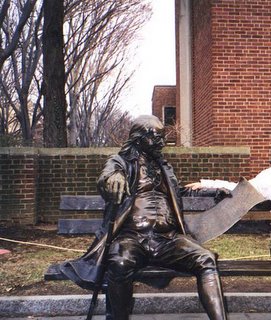 I do not think it will eventually cost that much. Tuitions are already at untenable levels and these inflation rates will seemingly have to abate. At another time I will delve into the causes of today’s exorbitant tuition levels.

One quick note though. Probably THE main cause of ridiculous tuitions is the government student loan program. These subsidies start out with ostensibly the most innocuous and wholesome intention – that of making college education more affordable. But invariably, as with any attempt at price control, they end up distorting the economics of college tuition. Universities and colleges haven’t done anything to rein in their expenses. After all, why should they when the federal government will loan or grant all of the money its customers (students) need? Essentially, these schools have become little federal governments replete with all of the markings: expanding budgets, bloated administrations, entrenched labor (i.e. tenured faculty), and the defining characteristic - they are funded by public tax monies.

Ten years after I left UPenn, the campus is now almost unrecognizable to me. There are huge new buildings all over the place. UPenn has extended its tentacles in all directions. Sure they will say that a particular building was paid for by some rich alumnus, and they may even name it after them, but is that benefactor paying for added staff salaries and benefits, maintenance, heat and electricity, etc.? I think not – the students are.

How is college more “affordable” when students nowadays are graduating with upwards of $50,000 in loan debt?

Yes, I have seen those studies that “prove” that a collegiate education at today’s prices is a great investment because college grads will more than earn back their tuition costs through higher wages (than non-grads). What other conclusion would you expect from “academic” studies?
Posted by CaptiousNut at 7:23 AM