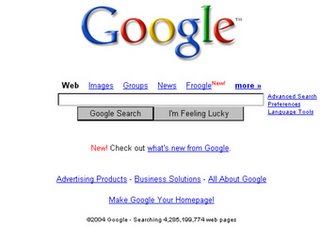 Between 1987 and 2000 the stock of Home Depot (HD) split nine times. A veteran trader I knew lamented one day, “I knew I should have bought that stock….the parking lot was packed every time I drove by.”

Many famous investors have suggested that individuals invest in sectors that they know. In this spirit, I bought some shares of Google in December. I wanted to buy it in the fall around $100, but I missed it and had to buy it at $177. Today it closed at $228 and I am really kicking myself for not buying it at $100. In the absence of a major price spike, I plan on holding this for a very long time.

Why did I buy it? Because I google about 20 things a day. Not only that, I see massive growth ahead. I don’t know anyone who googles nearly as much as I do. The future on this is so clear to me. More people will have broadband, internet literacy is only going to grow, wireless internet devices like blackberries will soon be as common as cell phones, and there will just be more and more googling.

Of course there is risk. Microsoft and Yahoo have Google in their sites. But Google has the head start. Remember everyone tried to start up auction sites to compete with Ebay and they all fell meekly by the wayside. Amazon defeated similar competitive threats. All Google has to do is hold off the upstart search technologies of Microsoft and Yahoo and it will solidify itself as a very profitable monopoly.