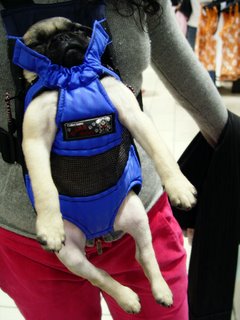 Alright, I have held it in long enough. This stupid commercial I just saw for doggie stairs has put me over the edge.

What is wrong with YOU PEOPLE AND YOUR DOGS?

A good friend of mine just got booted out of his housing development because his dog mauled a neighbor. Okay, he didn't get evicted, the dog was. Instead of sending the dog to the mythical "farm upstate", he has decided to move to a new home.

My sister spends about $300 a week to kennel her dogs when she goes away. That exorbitant sum includes "extra play time" and "doggie phone calls". Yes, she calls the dogs on the phone. 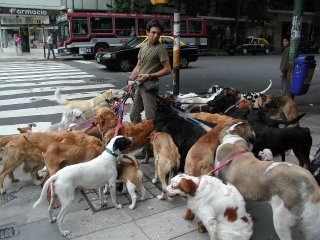 Another friend sends her canine to "doggie day care" five days a week because it is better "socially" for the dog than staying home alone all day.

One in-law seemingly can't send us a family picture that doesn't include their dogs. It is great to see the development of my nieces but I'm not really interested in the growth of two extremely fat pugs. And they are definitely out of place on a Christmas card.

I have friends in Charlestown, MA that are routinely called "yuppies" by the residual townies there and wonder why. Could it be from seeing them walk that 13 pound hairless, emaciated poodle everyday? 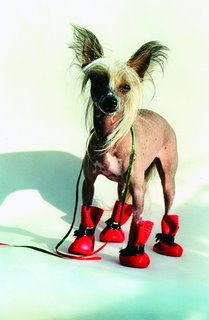 Then there are the couples that get dogs INSTEAD of getting married or having kids.

The deranged that get gourmet dog pastries and take the mutts to aromatherapy and pet "healing" centers.

Have you seen these ridiculous ergonomically raised dog dishes? 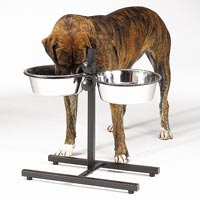 Cat people can be nuts too. One friend spend $2,000 getting a half-digested piece of string removed from her feline. I think my brother just spend $4,000 saving his cat. My wife has emphatically stated that our cat has a strict $400 "deductible" and a DNR order as well.

Another friend spent $250 to "save a cat" from a website. The site marketed the cats as on "death-row" and about to be killed if no one paid the $250. What a great business plan! Get kittens costing practically zero. Put some pics of them on a website accompanied by a death countdown and take $250 per cat from assorted Morons.

I knew a guy in Center City Philadelphia who started a pet walking business about ten years ago. He sat at the bar all day drinking martinis and bragged about how much money he was making. He had one client who paid him $600 a month to walk his dogs twice a day. Of course the bragger outsourced the walking to struggling artists and the like. But this was definitely a great business to start there at the time. 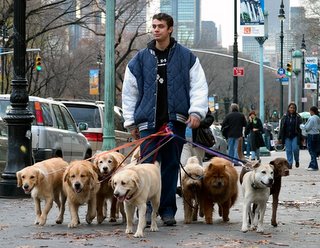 My grandmother used to regularly bake meatloaf FOR HER DOG!!!

Anyway, feel free to one-up my anecdotes as I am sure they don't do justice to the complete inanity of Deranged Dog People.

The day after I posted this I went to Spring Lounge on Mulberry Street in Manhattan. Some whack-job had her pug in the bar. It wasn't long before the dog was on the table sampling everyone's pints. The bar was instantly aglow with camera flashes. Alas, my camera got stuck in my pocket and I missed the shot.
Posted by CaptiousNut at 2:21 PM

From Charlestown, MA - My dog is not a poodle...and she takes offense to being called one. She's much smarter, and cuter, than any poodle - hairless or otherwise.

Those dog stands are actually for large dogs, becasue if they bend down so much they can damage and even twist their organs. Trust me one of those basic stands is alot cheaper than paying a vet to untangle my dogs intestines. I have a wolfhound, and they have obviously been bred quite far away from a wolf, so can't eat without damaging themselves. Do your research before you laugh at people saving money.