Morons Think This Is a Recession 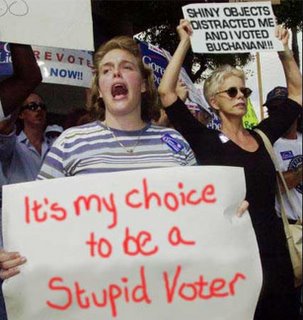 A friend of mine asked me this weekend if we were in a recession. I almost fell out of my chair, but sadly his inquiry is quite indicative.

Big Media has successfully propagandized economic reality. All three asset classes, stocks, bonds, and real estate are booming. Yet the MSM organs incessantly contort the current prosperity into at best a mirage with dire impending consequences and at worst....a fictional "recession".

This onslaught of negative thinking is clearly having an impact. During the 2004 presidential campaign, when attacks on the economy were in full force, 36% of Americans thought we were in recession. One year later, even though unemployment has fallen from 5.5% to 5%, and real GDP has expanded by 3.7%, the number who think a recession is underway has climbed to 43%.(link)

Devil’s Advocate: But wait a minute CaptiousNut, are you discounting this poll? That many people can’t be wrong. Maybe your metrics are wrong? 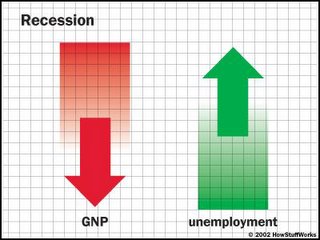 Well first of all, the fact that since 2004, MORE people think the economy is in recession than before, even though all macroeconomic statistics are better, seems to DISCREDIT the 43%. Second of all.....

A "recession" is a well defined term:

We haven’t had a single negative growth quarter in FOUR YEARS - nevermind two in a row (see pic below).

Shouldn’t a poll asking about a recession first verify that the respondents actually know what a “recession” is?

All that poll proves is that a substantial portion of the populace are MORONS.

That chart is illustrative of the perma-negative reporting. I grabbed it from perma-dour CNN so that accounts for the “SLOWER GROWTH” spin.

Of course that graph was published April 28th, 2005. At the time CNN used first quarter GDP numbers to forecast “the end”, including “stagflation” i.e. slower growth and higher prices. As usual, they were completely WRONG.

I suspect this reflects the bad economic conditions at newspapers, rather than in the nation as a whole. Workers at GM, Ford, and other uncompetitive companies probably have an unrealistically negative view of the economy, too.

Surely this is partly true, but remember as I have detailed many times, Big Media is essentially a socialist institution that would be harping on illusury negatives even if their businesses were doing better.

Bloggers and alternative media in general have effectively counteracted the more outrageous transgressions of Big Media, yet with the smaller issues the socialists remain supremely influential.

That is one MASSIVE INTELLIGENCE FAILURE.
Posted by CaptiousNut at 3:45 PM