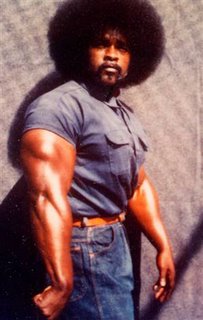 You have to click on this link to read about and see the panoply of Morons that showed up.

Big Media has never fairly reported on demonstrations like these because

1) They agree with the causes of these Morons.

2) Obviously an accurate reporting WOULD NOT BEHOOVE their image.

In other words, this is just another example of the Big Media's systematic whitewashing of reality.

Big Media is a monolithic propaganda organization. Sure these demonstraters are whack-jobs and perhaps real outliers.

But Big Media has a very fickle policy towards extreme examples.

Consider the outlier Enron. It was one of 20,000 public companies to be an accounting fraud YET Big Media wields it as a most favored talking point to bash corporate Amererica, Wall Street, and capitalism. Congress even went as far as passing that superfluous and onerous Sarbanes-Oxley law.

If Big Media directed the same spotlight on Tookie's mourners...

....Congress would call for a full investigation of the schools these nutjobs went to, where their parents are, and would probably be passing laws to institutionalize them.

In an ideal world, journalistic ethics would compel the media to report everything accurately - allowing the public to make up their own minds on issues.
Posted by CaptiousNut at 9:39 PM