Another Dose of Big Media Hypocrisy 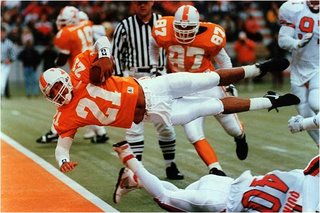 Well he was just elected to Congress from that nutty enclave of Asheville, North Carolina.

I saw him speak on Larry Kudlow's CNBC show last night and was underwhelmed to say the least. Think of the dumbest football player you knew in high school or college. Well that is what he sounded like. I thought about putting it up on YouTube but it was too long and torturesome. Not only is he incredibly dumb (for a quarterback) but he speaks  &nbspr-e-a-l    &nbsps-l-o-w-l-y.

But what do you expect from Asheville?

Massachusetts just elected Deval Patrick who'll be its first Democratic governor in 16 years. The Boston Globe reported this spring that Patrick is personally leveraged to the hilt. He owes $5.9 million in mortgage debt which they generously calculated at a $27,000 per month payment.

In order for Patrick to owe that much money and pay a mere 27k per month, someone would have to have given him a 30 year mortgage at 3.65%.

Recently I heard, more credibly that his payments are closer to $38,000 per month. We'll never know Patrick's real financial status because he refused to release his records to the public. Massachusetts confiscated $18 billion in state tax revenue last year. Now they have a governor to oversee it who is not only personally leveraged but won't reveal any potential business conflicts of interest.

Now I have no idea how much money Patrick has but consider that he will only be earning $140,000 per year for his gubernatorial services.

Figure that 38k per month minimally implies at total expense of $50,000 per month to pay taxes, insurance, upkeep etc.

He and his wife would need a million bones per year in gross income just to cover that. Again, I have no idea how much money the guy has, but he'd need at least $10 million in bonds to throw off even 500k in interest income per year.

This unctuous fellow has all sorts of business dealings and relationships but no one seems to care in Massachusetts. It's amazing the pass some people get and others don't. (Above is his Milton home and below is his leveraged Berkshires project) 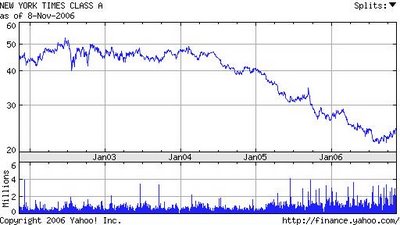 Speaking of the Boston Globe and the selective application of principle....

The Globe's parent, The New York Time Co. has a very unique ownership structure that Marginalizes its public shareholders. From Dinocrat,

How can a public company get away with this?

Normally, in a public company, you would expect the independent directors to take action to stem the losses and to enhance shareholder value. The New York Times is not a normal public company, however. 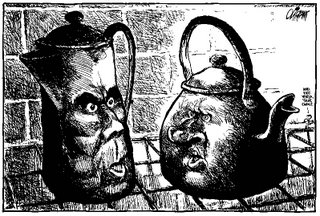 Hey pot, doesn't that kettle look black to you?

The New York Times is not only most influential newspaper in the country, they are the most hypocritical. All the socialist rag does is rail against CEO pay, executive stock option grants, full financial disclosure and whatnot. I simply don't see how Standard and Poor's could index this company with such an unaccountable ownership structure.

After a 50% decline since 2000 that erased $3.5 billion of their money, some investors are finally taking action. From Briefing.com (paid site),

AP reports a Morgan Stanley investment fund is stepping up its confrontation with The New York Times with the submission Wednesday of a shareholder proposal that would urge the co's board to take several steps to "reform" its corporate governance practices. The proposal, if it is approved at the co's next shareholder meeting, would recommend that the board put to a vote the co's dual-class share structure, which currently allows the members of the Ochs-Sulzberger family to control the co through a special class of stock. It would also recommend that the roles of chairman and publisher of the Times' flagship newspaper be separated. Both jobs are currently held by Arthur Sulzberger Jr. The shareholder proposal was submitted Wednesday by Morgan Stanley Investment Mgmt, which owns about 7% of the Times' shares. The proposal also includes a recommendation to adopt a policy of making the chairman an independent director and making a majority of the members of the board's compensation committee independent directors.

Make no mistake, these investors just want a bounce so they can get out.

Currently around 11% of NYT stock is held short by Wall Street traders, which is a moderately high number.
Posted by CaptiousNut at 9:22 AM

Nice to know that your governor has empathy for the "common man".
Witness the modest mansion under construction. Just imagine the press this would have generated if Patrick were a Republican !

I certainly thought about that angle but almost all of these pols are very rich. Outgoing governor Mitt Romney is certainly loaded (Bain Capital). Michael Bloomberg, John Kerry, etc.

One difference however is that Mitt Romney opted to forgo his 140k gubernatorial salary. As did Deval Patrick's Republican opponent Kerry Healey should she have won.

Deval was confronted with this but did not respond, adding greater mystery to his real financial health.