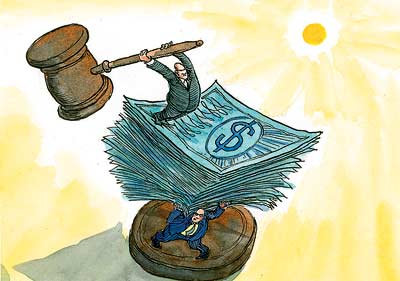 Part of this post is reprinted from a prior one.

In California, a group of stock brokers sued their employer (Merrill Lynch) for overtime pay and won a settlement. Amazing considering that they get paid on commission and presumably have already been compensated for their "extra" work. But I guess in the land of fruits, nuts, and communists...it is not at all surprising.

The lawyers will collect $9 million of the $37 million settlement while brokers will get around $10,000 each. Furthermore, other brokerage firms are going to settle with their brokers without a fight as well. This is simply corporate extortion wrought by legal technicality, socialist judges, and vile class action attorneys.

Most people have an idea that class action lawyers are an economic bane but it's mostly just a vague notion. Remember, Big Media has never ever done a negative story on class action lawyers. The negative externalities of class action tort simply don't exist, at least in their view. When tag gets banned, the pinheads mutter about lawsuits, but they never indict the legal climate or the villainous lawyers. In fact they coddle them.

Not only did all of the major brokerage houses have to settle with California over this case, it cascaded into other states as well. So far the cost for job-creating brokerage firms has been:

Cost of Litigation + Cost of Settlement

+ the Cost of Changing their Compensation Plans

+ Cost of Lobbying for Legal Reform

The firms tried to get the laws changed, but pols everywhere remained uninterested or should I say, disinterested. Not many econo-illiterate, jelly-spined politicians want to stump for a law that,

1) would anger the tort lobby - remember most pols ARE LAWYERS.
2) would appear to put them on the side of evil Wall Street firms.
3) breaks their general habit of doing nothing.

Now you won't read this officially anywhere but the brokerage firms have considered everything and made the rational corporate decision to fire all brokers that earn under 100k.

Okay, they aren't exactly firing them but these antiquated Fair Labor laws proved too hard to circumvent. Hence the firms instead had to create complicated compensation plans that would encourage all the sub-100k earners to quit.

So who cares? Right?

First of all, I mentioned this small beer story to highlight a clear negative externality of class action lawyers - parasites who kept a third of the multi-million dollar settlements while they eliminated five-figure jobs. This brand of BS is simply not reported on by the socialist organs of Big Media.

Another casualty, besides the up-and-coming brokers, is customer service. They'll be fewer brokers to answer calls, walk customers through setting up 529 accounts, and help guide the clueless through the investment universe. Firms will be forced to push clients toward internet-based resources, annoying telephone menus, and overall a more depersonalized customer experience. This move won't affect wealthy clients one bit - their plentiful assets will still receive professional, white-glove care. As usual, the victims of these rich class action lawyers will be working class brokers and their relatively lower income clients.

I drafted this post a while back. Today I did find a Dow Jones newswire mention of this lesson in class action externalities. It includes these two rich quotes,

"This would be a step in the direction of fairness, but lowering the brokers' payout rate in exchange for complying with the law may not be the best way to proceed," said Justin M. Swartz, a labor lawyer with the New York-based law firm Outten & Golden.

"Other firms will be wise to follow Smith Barney's lead, because following the labor laws should be a priority at all companies. I would hope, however, that the other firms decide to do so without taking money out of brokers' pockets," he added.

Does this lawyer need to be punched or what?

It's jaw-dropping to hear a labor lawyer paint the brokerage firms as the bad guys.

Lawyers are the ones who eliminated their jobs, lowered their pay, and lowered the level of customer service for everyone so they could line their own pockets.

Lawyers are half the problem; on the other half are politicians, in bed with the tort lobby and afraid of how fixing an antiquated law might make them look politically.

The Fair Labor Standards Act of 1938 was written to protect blue collar workers who punched a clock and sold door-to-door - hardly the profile of today's six-figure earning stock brokers.

On second thought, since the pols are all lawyers, we can safely say that lawyers constitute the entire problem. And it certainly doesn't help that judges are all lawyers as well. 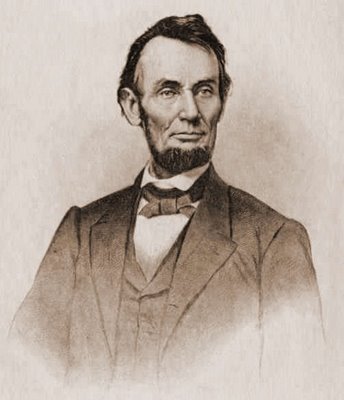 A lawyer himself, Abraham Lincoln once said,

"...if in your own judgment you cannot be an honest lawyer, resolve to be honest without being a lawyer."

So far, brokerage firms have agreed to pay more than $250 million to settle claims.
Posted by CaptiousNut at 3:34 PM

Heh. Another disgruntled low-paid chump. I enjoy this business of making millions of the sucker of others.