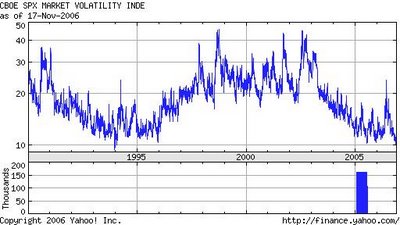 The overall economy really is booming. Deny that, well then you are professing considerable ignorance. A consultant friend of mine informs me that a hotel room in Manhattan is not to be found these days for less than $500 a night. He told me it should be more like $350. That is both a sign of prosperity and one of burgeoning inflation.

Though energy prices are all over the place and home prices quietly imploding, the stock market marches on fearlessly. Note last week it shrugged off a major political victory by American socialists.

Not only are stocks roaring, but they are trading with the euphoria of 1999. This very short-term bullish and more long-term bearish headline just flashed on Briefing.com,

Market volatility, as measured by options market prices, is close to unchanged after the VIX (CBOE Volatility Index) made an intraday move below the 10.00 level for only the second time since 1994.

The VIX is one of the only indicators I look at. If you recall, my career started as an option pit trader. It's a broad measure of option premium in the stock market. A low VIX implies low investor fear. The index always tends to get whacked around the 4th of July, Thanksgiving, and Christmas weeks when market participants generally vacation. Nonetheless, it's essentially in uncharted and perilous territory.

Yeah, corporate earnings have been great, wages are upticking, and hotel rooms and flights hard to book BUT the stock market's move feels to me like a massive trader short squeeze. I am short the NASDAQ and bleeding a bit. Hopefully I'll be able to hold on to the trade long enough to get some money back.

The stock market may think it's 1999, but there were much more promising companies to invest in back then. Today, the bull story is mostly one of cheap money (low interest rates) and the elixir of never-ending productivity gains. For sure, it's one scary freight train to step in front of.

But in 1999 we had paradigm shattering breakthroughs like the internet, the Cheap Revolution, nascent wireless technologies, etc.

All we have today (outside of Google) are iPods - toys that aren't about to usher in any new industrial ages.
Posted by CaptiousNut at 4:05 PM

Email ThisBlogThis!Share to TwitterShare to FacebookShare to Pinterest
Labels: VIX