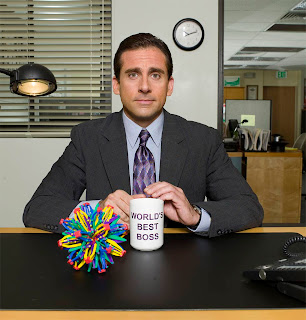 I was just told by my sitter that Steve Carell lives nearby at the Blackrock golf course community in Hingham, MA. It's weird to think that a celebrity would want to live in such a commuting/family-centric sort of town. I am sure that it is just one of his many abodes. In fact, it looks like Marshfield claims him as one of their own as well.

Anyway, I love The Office and count it among of my favorite shows but this season's novelty, i.e. the new 60 minute format, I feel, is pushing it. Thirty minutes is kind of short but I just don't know that any comedy can pull off a full hour. Forty-five minutes would be probably be ideal.

The other problem I have is that the show is too much about Michael Scott (Carell). There are plenty of other great characters that get scant attention - particularly that dipsh*t Andy. But this is invariably what happens when the lead character plays a productive role in the show. Just as Denis Leary makes his entire show insufferably about him, I feel Steve Carell is overly enamored of himself as well.

These guys really want that Emmy...
Posted by CaptiousNut at 10:17 AM

Email ThisBlogThis!Share to TwitterShare to FacebookShare to Pinterest
Labels: steve carell, the office

1. This season's "novelty" is only in effect for four episodes. So this week it will be back to a regular 30-min episode. Additionally, hour-long specials are actually considered to be two episodes shown together by the network, so in syndication you might only catch one half at a time.

2. That being said, I kind of agree. I think the deliberate attempt to make one story-line pan out over a full hour, over and over, is leading to more dull moments in the show, whereas previous episodes sought to pack in as many punchlines in the 30-mins as possible, making the episode seem more "dense."

3. Michael Scott is a great character, and deserves the centrality he receives, although this has been over-played a bit in the hour long format to fill some time. However, consider the alternatives... Pam and Jim (Jam, as Kevin says) are now together. Much of the tension of the older seasons from episode to episode was the latent sexual tension between these two. Now they're together, do you really want to see them being kissy and affectionate and serious with each other more than you already do? Andy would be nice, and he's kind of beginning to overshadow Dwight, probably on purpose as he is starting to take over Dwight's girlfriend. But Dwight has now been marginalized, it seems. Most of his scenes are him being sultry and emotional, rather than behaving erratically, nerdy or saying outlandish one-liners. Angela and Phylis, while both fairly well developed, really aren't interesting or endearing enough to have additional limelight exposure. Same goes for Oscar, I'd say. I think Stanley could be explored a bit more than he is, he is usually a pretty funny character, and Kevin's increased onscreen time on Episode 4 was fun to watch. My favorite character getting more airtime this season is definitely Creed, though, and I'd love to see him in front of the camera more often.

4. One reason you might be sick of Michael is that he, like Dwight, is experiencing all kinds of relationship and personal problems, and thus has been doing a lot more sobbing rather than delivering his totally off-the-wall sophistry. Michael Scott shines when he reacts to the way his employees and other individuals continually frustrate his childish plans... seeing Michael as an adult, with adult problems (bankruptcy) which he is just too overwhelmed with to wise-crack, is a bit of a let-down.

5. They deserve an Emmy. This is one of the best written and acted shows on television. There are a few instances where the actors appear to be trying to hard to deliver a line (usually Pam with her sometimes predictable monologues and delivery) but overall the characters are immersive and believable and watching the show is entirely convincing.

You should forward that comment as a cover letter for a job opening at Entertainment Weekly.

I can't stand *Jam*. They say ratings skyrocket when main characters start to date each other - Rachel and Ross come to mind (Friends).

My hunch is that while male viewers hate this, the females really enjoy these twists and that's where the higher ratings come from. My wife essentially admitted as much to me yesterday.

Personally I think the office is better when it revolves mainly around michael. In my opinion, the office is supposed to be shot like a reality show, like the real world, hense people speaking to the cameras.

We are supposed to feel like we know secrets about the characters, and that is why it is not a typical sitcom. That is why when you rewatch episodes, you pick up on small things, like the exchange of glances, and minor comments. We are supposed to feel like we are let in on a secret, or we have observed something that we shouldn't know, and that's what makes the office so addictive. If we knew where the story was going and were exposed to the characters more than we are now, we would probably grow tired of them, and they would probably become more predictable as well. The office gives the feeling that these are people we know slightly, and they show us certain characteristics that make us wish we knew them better. The focus being on michael in a way makes us yearn for the other characters. I think the way the office revolves around michael is genious.