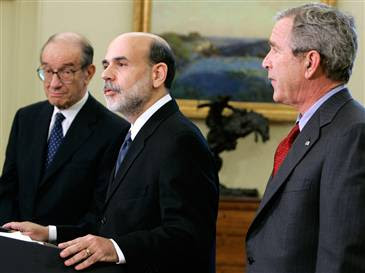 I am aware of the financial news scuttlebutt but twelve years of experience has conditioned me not to pay too much attention to it.

The other day, while idly watching my son at the park, I grabbed the only reading material I could find in my car - the April 2007 Futures magazine. (I DID NOT buy it. My buddy in Manhattan made me steal something from his contemptible roommate. This is just the type of service that I provide for my friends.)

Bernanke told the House Budget Committee there had been "no material change" in the Fed's economic forecast in the wake of the market slide and said he saw no "liquidity crunch" in the world or any breakdown in the workings of financial markets. He said he still expects moderate, if not improving, growth as the housing market stabilizes.

Just to remind y'all the Dow dropped 416 points on Feb 27th, 2007. The media clowns attributed most of it to "subprime woes" but Wall Street roundly declared them "contained". Such was the backdrop to Bernanke's Congressional testimony two weeks later.

Let's fast forward to what we do know FOR A FACT today. 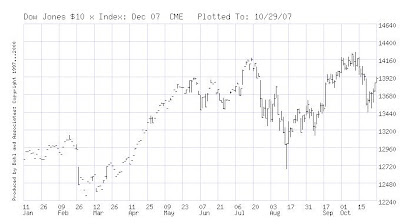 Remember when Bernanke dropped rates 50 basis points last month with the fierce intimation that it was "one and done"?

The guy is provably a walking monthly-contradiction of whatever he said last. Perhaps when oil is $100 a barrel he'll go back to worrying about "upside inflation risks"? In that case, you'll know to brace yourself for another "liquidity crunch"!

As I have said before, the hardest part about trading the financial markets is NOT UNDERESTIMATING the stupidity of all parties. For example, the Fed Chairman may well be a vacillating dolt, doing long term harm to our economy for short term feel-good, stock and bond upticks. Nevertheless, fund managers and sheepish investors (who should be farsighted) may go hog wild and bid up securities again after the inevitable rate cut tomorrow. I seemingly spend all my mental energy trying to figure out who the biggest Morons are, and how to bet against them.