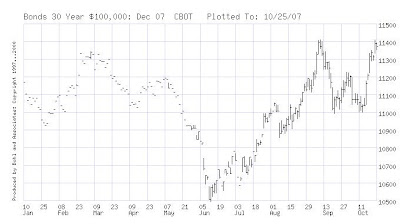 Usually, when the really good, "no-lose" trades come up, my position is already so big that I can't add to it. That is the case now. Along these lines, I knew a veteran trader who always put his "5th buy" in his Keogh. Despite paying Merrill Lynch a sodomizing .09 per share in commissions, his retirement account grew by leaps and bounds.

I have been bearish on, and short, the 30-Year Treasury for a couple months now. I am down a good four points. If I was flush, I would hit it with a baseball bat today. Here's my reasoning:

The stock and bond markets have exploded since the August "credit crunch". As I have blogged on before, market participants are all betting on more rate cuts from the political animal (Bernanke) that runs the Federal Reserve. There's no doubt in my mind that another 50 basis point cut is baked into both stocks and bonds. 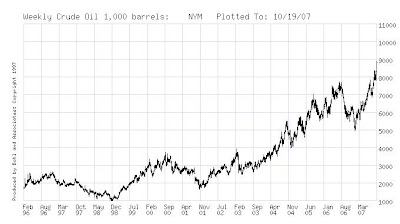 Here's the wrinkle: oil just shot up to $92 per barrel today and the dollar is at a new multi-decade low. These are the only developments that MIGHT prevent those inflating idiots from dropping rates to "save" an unsalvageable housing market.

Ergo, markets shouldn't have a 100% likelihood of a cut priced in. Oil could very easily be $100 next week and this dollar weakness could cause an international run on our currency. As much as these politicians would like to artificially prop up asset prices, Bush's poll numbers, and their perceived re-election chances, they may in fact be forced to stand down and do something they've never endeavored before. They may have to sit back and do NOTHING. What a notion!

That's why I see shorting the long bond as very good bet TODAY.

For my mind it sets up as an ideal trade.
Summing it up, I am confident then that I have timing, fundamentals, and a good entry point all on my side. The risk/reward proposition seldom looks more actionable.

One can short the futures with very little money down. It's a 113 dollar number with minimum increments of $100,000. In other words, if you short one contract at 113 and buy it back at say 109, you would make $4,000, that would be one grand per point. To put it perhaps more simply, shorting one future's contract would be like shorting 1,000 shares of a 113 stock.

So shorting the long bond is a cheaper, less risky way for the small investor to play the commodity bull market.

I will revisit this trade suggestion, hopefully very shortly and at lower prices.
Posted by CaptiousNut at 4:50 PM