If you are, by chance, one of these people that's proudly resistive to popular culture and hasn't yet seen Brooke White perform on American Idol, watch any of the clips you find here. 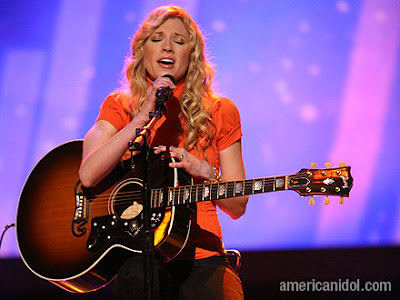 She also has a beautiful personality to match her obvious talent and stunning looks. No matter how she does on the show this season (ten contestants left), I get the feeling she is going to a star recording artist for years to come.

In her pre-American Idol life, she was a nanny who, as my wife unequivocally stated, "WOULD NEVER BE HIRED TO WORK IN THIS HOUSEHOLD." There's no way my wife would let her babysit and "play house" alongside this author on a daily basis. In fact, in the CraigsList ads my wife has specifically stipulated, "Wanted - Homely Lesbian Babysitter".

Now here's another nanny that my wife would never hire - even for $2.50 an hour. 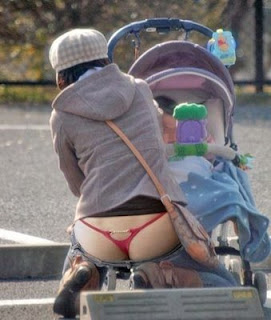 Searching for that pic, I was led to a blog titled I Saw Your Nanny.

Turns out to be some type of anti-nanny site where all sorts of people submit content on nanny observations. It's, among other things, a rat-out line for NBB - Nannies Behaving Badly.

On Friday March 14th 2008 around 12:00 pm I witnessed a nanny that makes the rest of us Nannies look horrid. I was at the park near Shepton HS and Huffman Elementary,off Plano parkway in West Plano TX, with my charge when I saw a little girl all alone on the playground. The girl had blonde hair and was wearing red pants and pink Crocs. There were teenagers swinging nearby but I knew she didn't belong to them off to the other side of the park about 100-200 ft. there was a young Hispanic woman wearing a gray sweatshirt and an older Hispanic man that when it dawned on me that the little girl must be this woman's charge. My biggest problem was that this woman wasn't paying attention to her charge and the little girl was only about 1. You cannot leave your charge alone like that that's horrible and irresponsible.

The site clearly gets a lot of traffic. People, mostly women, really do enjoy reading this real world gossip. The fact remains, nobody cares about the economic nuances of homeownership and the other stale motifs of my blog!

Now getting back to the full-mooning nanny pictured above...

They say that plumber's butt is "the new cleavage" - heck, it's got a Wikipedia entry. Even with my wife's strict hiring criteria, I have been personally mooned by no less than three of my sitters over the past couple of years - though they were more of the crescent variety. I must say I found it a little discomfiting. Two of them even skipped the thong altogether! 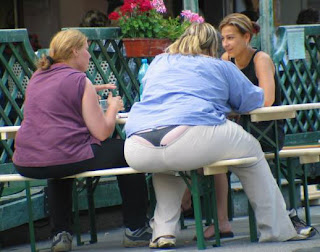 Experts say the thong is on the way out - but, according to my googling, they've been saying this for a few years now. At the bare minimum, they should at least legislate a size limit.

Posted by CaptiousNut at 7:26 AM